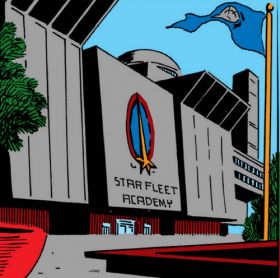 Upon the founding of the United Federation of Planets on Reference Stardate 0/8706.06 (6 June 2087),[1][2] plans were implemented for the organization of Star Fleet Command, to be completed within the next three years, providing a unified military force for exploration and common defense. To that end, a Star Fleet Academy was also envisioned.[3] On RSD 0/8909.14 (14 September), a tragic space wargames accident resulted in speeding up the chartering of Star Fleet Academy, and the Academy opened on RSD 0/9109.19 (19 September 2091) on Alpha Centauri with a class of 300 students, representing eight different races. The first commandant was Stavros Niarchos.[1][4][2]