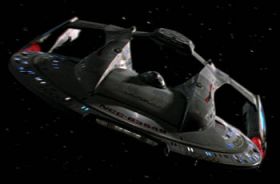 The Akira class fast attack heavy cruisers were designed for superior speed, durability, and firepower, and was capable of multiple mission types, including first strike, reconnaissance, incursion, and perimeter defense, as well as colonization support and planetary evacuations.[1] The Akiras were produced at the Antares Fleet Yards on Antares IV,[2] as well as at Utopia Planitia Fleet Yards on Mars.[3] First commissioned in 2367,[4] the Akira class was the first vessel class authorized by the Perimeter Defense Directive (PDD). Other classes developed under this classified directive—including the Norway, Steamrunner class, and Saber clases—were brought into active service over the next several years.[5][6][1]

Of the twelve new ship classes placed into accelerated development by the PDD, the Akira class emerged as one of the most versatile.[6] The Akira class was one of the first Starfleet designs since the Andor class[7] to focus primarily on superior firepower and the projection of force in a quick and decisive manner.[1] Armed with both photon and quantum torpedoes,[8] six Type X Phaser arrays,[2] the Akira class possessed a devastating first-strike capability.[1] The Akira class also incorporated three quick-pressure shuttlebays; the single forward shuttlebay served as the primary launching facility, while the two aft bays were typically used for shuttle recovery. Shuttlecraft ranged from standard multi-role craft like the Type 8 Shuttlecraft to specialized fighters, which could be used for picket defense or patrol duties.[1] Squadrons of 30-50[6] such support craft allowed the Akira class to fulfill a unique support role, and to project a Starfleet presence further than most other starships.[1]

Originally envisioned merely as the test-bed for new phaser and torpedo technologies, the Akira class was not initially intended for mass production or as a front-line combat vessel. Following the destruction of a sizable portion of Starfleet's forces during the Battle of 359, the Akira class was pressed into development, bringing the experimental class into the spotlight under the auspices of the PDD.[1] This mission redesign coincided with increased Cardassian crises and the Dominion War, and Starfleet commissioned many more PDD ships than Starfleet Command had initially anticipated, desperate to throw a generally proven design onto the front lines.[6]

The most noteworthy deployment of the Akira class was, perhaps, the defense of Sector 001 during the Borg incursion of 2373. Akira class vessels, including the U.S.S. Thunderchild NCC-63549, performed with distinction during the incident.[8] Limited engagements against Cardassian and Tholian forces also helped to bolster confidence that the Akira class was, indeed, a viable design. Wide-scale production began shortly before the outbreak of the Dominion War,, which would again extract a terrible toll on all sides. Conflicts at the Chin'toka system and Deep Space 9 during Operation Return would serve to ensure the Akira class' place in history.[1]