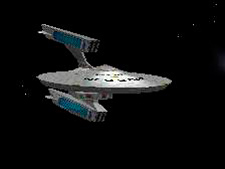 The Federation's Akula class destroyer (DD) entered service in 2250. It was designed as a smaller and less expensive stablemate to the Constitution class heavy cruisers, but was less successful. While it carried cruiser armaments, it lacked the engine power of a cruiser, making full use of its complement of photon torpedoes impractical. While the ship lacked maneuverability, its large saucer section made it capable of taking considerable punishment without losing warp power. During peacetime, the class was expected to carry out essentially the same research and exploration missions as the Constitution class, resulting in the Akula class having comparable laboratory facilities. The class had a crew of 200, a capacity of six shuttlecraft, two transporters, and two tractor beam emitters, as well as eight science labs. Armament included six banks of Type-1 phasers and four torpedo launchers with photon torpedoes. The DD variant remained in service until 2279, when it was phased out in favor of the Miranda class light cruiser.

In 2260, the guided weapons destroyer (DDG) variant was introduced. Inspired by encounters with the Kzinti, the class was deployed as a testbed for missile technology, but the experiment was abandoned because the missiles available at the time did not make up for the loss of two photon torpedo launchers. The DDG variant included an increased shuttle capacity of eight shuttlecraft and a crew complement of 220, and it was armed with two torpedo tubes, two Type-G missile launchers, and six banks of Type-1 phasers. The DDG remained in service until 2281.

The DD+ destroyer variant was introduced in 2273, in the hope of overcoming some of the shortcomings of the class. Half of the science labs were eliminated, and in addition to the DD variant's armaments, it mounted four banks of Type-3 phasers. Two years later, in 2275, a similar refit was introduced with the DDG+ guided weapons destroyer, which also saw four of the eight science labs removed and four banks of Type-3 phasers added. Additionally, faster missiles had become available, and more DD variants were converted into DDG+ variants, with the new missiles making the variant a more effective ship than the original DD specifications. The DD+ remained in service until 2292, and the DDG+ remained in service until 2288.

By this point, the Miranda class had effectively taken over the shipyard that had produced the Akula class' DD, DD+, DDG, and DDG+ variants, leaving a gap between the Miranda class light cruisers and the Okinawa class frigates that was starting to grow as the Akula class' numbers dwindled. To address this, the Federation commissioned two competing designs: the DW war destroyer variant and the Okinawa class' FFB battle frigate variant; the first DW prototype, the U.S.S. Humberto Ortega, was commissioned soon thereafter in 2287. The DW variant featured a capacity of seven shuttlecraft, three science labs, two transporters, two tractor beam emitters, three photon torpedo launchers and a single missile launcher, and a combination of Type-1 and Type-3 phasers. Two years later, in 2289, the DWD war drone destroyer variant was introduced, designed primarily for missile support. The DWD was used in direct combat and was considered operationally interchangeable with the standard DW. It had a capacity of nine shuttlecraft, and had four missile launchers and no photon torpedo capacity.

In the late 2280s, the CFF-type Okinawa class commando frigate, was found to be increasingly less capable of operating where interception might be a possibility. Unfortunately, there were many more missions than there were commando ships to perform them, resulting in several serious losses. The Fleet Marine officer campaigned for some of the new DW hulls to be converted into CDW commando war destroyers: larger, with better shielding, and faster than the CFF, the CDW was introduced in 2289 and would serve for a long period of time. The CDW featured a capacity of eight shuttlecraft, had three science labs, three transporters, two tractor beam emitters, and a combination of four banks of Type-1 and two banks of Type-3 phasers, but no torpedo or missile launchers. The CDW had a crew complement of 280, which included 130 regular crew and a Marine contingent of 150, housed in two barracks.

Two years later, in 2291, the final variant of the Akula class — the heavier DWC command war destroyer variant — was built for duty as a squadron leader, though it never amounted to more than 20% of the total DW production. The DWC featured a capacity of eight shuttlecraft, had two science labs, two transporters, two tractor beam emitters, three photon torpedo launchers, two Type-G missile launchers, and six banks of Type-1 phasers; the DWC had a crew complement of 220.[1]