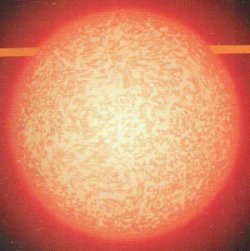 Aldebaran — a K-Type star located in Quadrant III of the United Federation of Planets, 68 light-years from the Sol system, where it was named and sighted as one of the brightest in the night sky by Earth's ancient inhabitants — was also known by its old Earth Bayer classification of Alpha Tauri. The third planet[1] of four in the system[2] was the site of the Aldebaran Colony,[3] a major Federation port with Class 3 facilities.[2] Doctor Elizabeth Dehner joined the crew of the U.S.S. Enterprise NCC-1701 from the Aldebaran Colony,[3] and the Aldebaran Music Academy was located there as well.[1]

The system also contained a red dwarf star, which orbited the primary at 97.5 billion kilometers. This secondary star is followed in its orbit by a vast trail of mineral and ice debris, somewhat like the tail of a comet, and the field was visible in the night sky on Aldebaran III.[4]