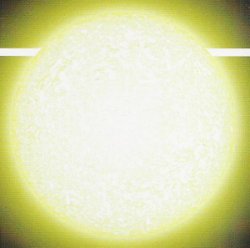 Altair, also known as Alpha Aquilae, was a white star orbited by eight planets, two of which were Class M and inhabited by a native humanoid population, which was rated H on the Richter Scale of Cultures, as they possessed advanced technology and spaceflight capability.[1]

Altair VI's colony world, Altair IV, declared itself independent in the early 23rd century,[2] sparking a brief but inconclusive interplanetary conflict[3] that was terminated by Federation peace-keeping forces. Following the war, the government on Altair VI continued to govern both worlds, while a Federation diplomatic team attempted to negotiate a resolution to the political crisis.[2] In 2209, the U.S.S. Enterprise NCC-1701 was scheduled to attend the inauguration of the president of Altair VI.[3]