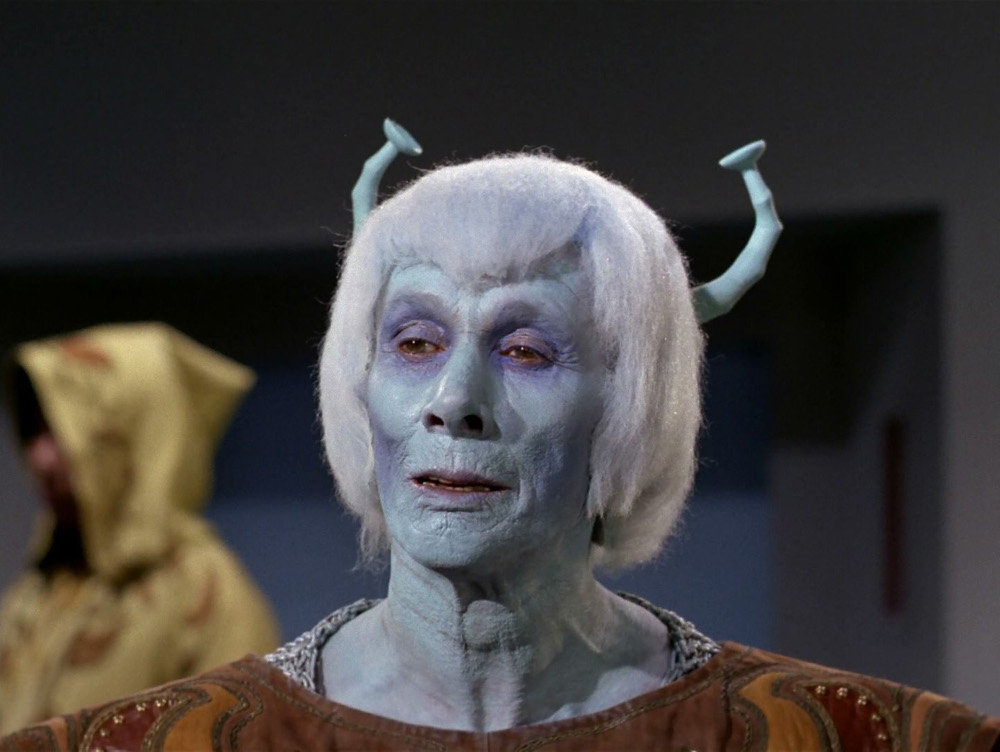 A blue-skinned species,[1] Andorians were native to Andoria, a moon of a gas giant[2] in the Procyon system.[3]

Andorians had a higher metabolism than humans.[2] Because of Andorians’ unusual physiology, intravenous injections are not possible; instead, a doctor was required to use intra-muscular injections.[4] Andorian antennae were used, at least in part, for balance,[2] and could also detect subtle shifts in temperature, electrical fields, and emotion.[5] An Andorian was partially disabled and unable to function immediately following the loss of an antenna, but was typically able to compensate after a day or two. Antennae could take up to nine months to regrow, although that could be completed in half the time with electrical stimulation and cranial massage therapy. Loss of antennae was a humiliating experience for an Andorian.[2] The movement of an Andorian’s antennae could also indicate emotional states;[6] an Andorian would sometimes point their antennae at a potential mate to signify attraction, though it was unclear if this was a voluntary or involuntary response.[7]

Andorians were an admittedly violent race.[8] They were a race of warriors with a history of conquest, and placed a high value upon family relationships and obligations.[8] As a rule, Andorians engaged in group marriages of four.[9] If an Andorian died far from home, his or her companions would typically carry at least part of their body back to Andoria.[2] Andorians did not fight without reason, however, and deplored dishonesty, though they were capable of duplicity.[1] In the 22nd century, service in the Imperial Guard was considered honorable, and military ranks had great influence on social reputations.[2]

An important part of Andorian tradition was the ushaan, a code of honor that demanded a duel with an ice-mining tool, the ushaan-tor. An enormous body of rules and regulations existed for the ushaan by 2154, including up to 12,000 amendments. The ushaan could be invoked for a matter of personal vengeance. However, there was a right of substitution, allowing each combatant to have a representative fight on their behalf. Furthermore, married combatants could postpone a duel indefinitely if there were no children to continue their clan. The fight typically ended in the death of one of the combatants, but could be called off if one combatant disabled the other in such a way as the duel could not continue.[2]

No Andorians were aboard the U.S.S. Enterprise NCC-1701-D when Data's offspring, Lal, was created. Lal rejected an Andorian female as one of four final choices for a body type, instead opting to become a Human female.[10] An Andorian was present at Risa when Captain Jean-Luc Picard vacationed there on Stardate 43745.2,[11] and an Andorian group bid for Tellurian spices offered by Kivas Fajo on Stardate 43872.2.[12]

Andorians were the subject of some kind of gender-swapping joke by Quark that Morn was slow to catch; the punchline was "and the Andorian says, 'Your brother? I thought it was your wife!'"[13] Andorian silk was prized for its softness, and Andorian jewelry was highly collectible and not usually available on Deep Space 9, though Quark did attempt to sell some at one point by inter-station monitor.[14] Chirurgeon Ghee P'trell of Andor was nominated for the Carrington Award in 2371.[15] In 2375, Yanas Tigan, mother of Ezri Dax, imported hand-painted Andorian tiles for her solarium.[16]