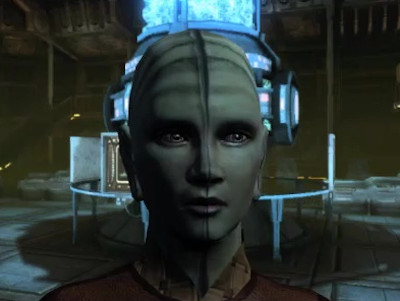 Danna Brott was the captain of the civilian transport ship S.S. Azura. According to Lieutenant Malcolm Sissel, she was "an experienced captain and the daughter of a former Starfleet officer." When her ship went out of contact for more than twenty hours in early 2409, Sissel noted that it was unusual for her, and a search and rescue operation was mounted. The Starfleet ship sent on the search soon found that the Azura had come under attack by Orion Syndicate raiders on the other side of the Vulcan Sector from Earth. The Starfleet ship fought off the pirates, but significant damage had been done to the Azura, and the warp core was already approaching critical levels with ejection systems not responding. The crew was evacuated to the Starfleet ship before the warp core detonated.[1] Brott was grateful to the Starfleet crew for their timely rescue, and offered to buy a round of drinks at Earth Spacedock's Club 47. She also gave them a communications code that they could use to call upon one of her ships, the S.S. Azura II, any time that they needed.[2]