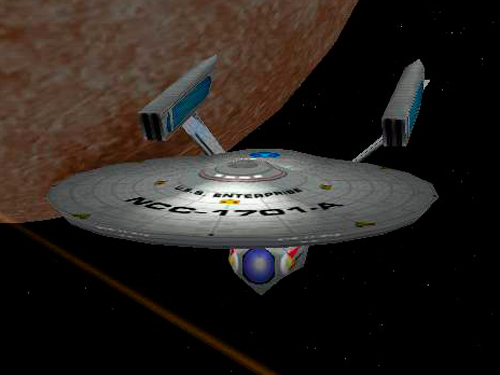 The workhorse of Starfleet, the Constitution class heavy cruiser was probably the most balanced, all-around starship known. In combat, the ship relied on its toughness and on the flexibility of its power usage. The ship incorporated several incremental improvements, which kept it competitive throughout the long history of the class.

The CA variant of the heavy cruiser was introduced in 2250. It featured a crew of 430, capacity of eight shuttlecraft, eight science labs, three transporters, two tractor beam emitters, and was armed with photon torpedoes fired from four tubes, and six banks of Type-1 phasers. The CA remained in production until 2269.

Simultaneously, the command cruiser (CC) variant was introduced. The command cruiser was an improved variant of the standard heavy cruiser, with an increased crew complement of 450, and was noted for its firepower and versatility. Command cruisers were marginally better in firepower, with two additional banks of Type-1 phasers, and considerably better in command, control, and communication facilities as compared to normal heavy cruisers. During wartime, many surviving CAs were converted to CCs. The CC remained in production until 2282.

Once when a CA was badly damaged in a battle in the early days of the General War, its photon torpedo launchers were completely destroyed. Due to the demand for torpedo tubes for new construction, it would have taken too long to repair the ship for duty. Rather than see an otherwise capable ship left in spacedock during the conflict, the ship was refitted with missile racks, entirely replacing the photon torpedoes, and the heavy drone cruiser (CAD) variant was introduced in 2278. It featured a twelve-shuttle capacity, six Type-B missile launchers, and six banks of Type-1 phasers, and remained in production until 2288 The design was refit in 2282 with the CADR variant, which added two more banks of Type-1 phasers, and the CADR remained in production until 2292. A second refit, the CAD+ variant, was introduced in 2286, and added a seventh missile launcher and two banks of Type-3 phasers.

The heavy command cruiser (CB) variant was introduced in 2289. A highly improved version of the CC, the new design provided a 20% increase in phasers, a 100% increase in missile capability, a 25% increase in reserve power, and a 7.5% increase in warp power. The crew complement was increased to 480, the shuttle capacity was boosted to twelve, and a fourth transporter facility was installed. Armaments now included four torpedo tubes, two Type-G missile launchers, ten banks of Type-1 phasers, and two banks of Type-3 phasers.