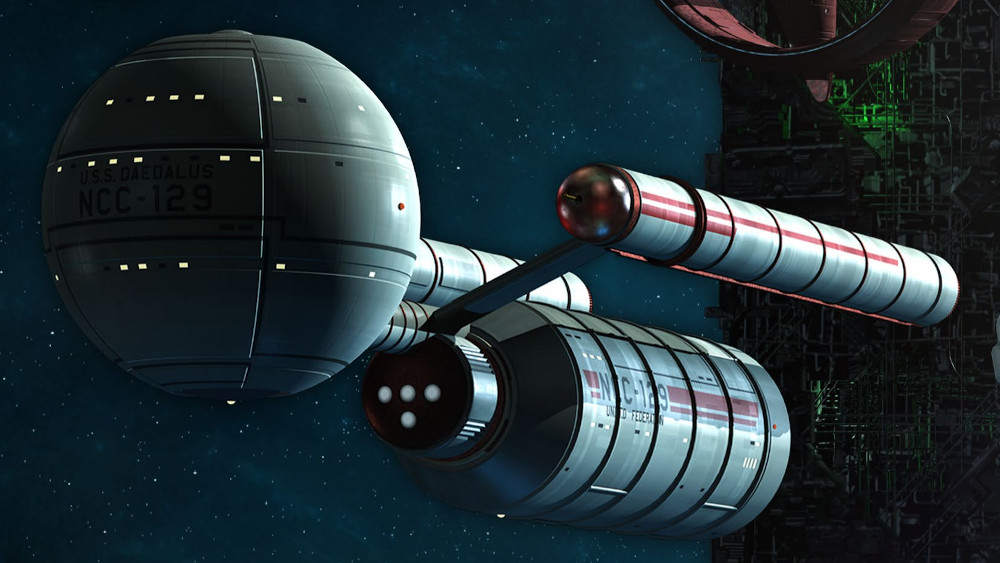 The Daedalus class came into service in 2140 as part of the United Earth Republic Starfleet, which was in need of a large vessel to help protect and patrol the fledgling government's few trade lanes and colonies. After the successful development and launch of the NX class a decade later, the admiralty began to pull the Daedalus class ships back to the Sol system for possible decommissioning, but the outbreak of the Romulan War soon thereafter gave the class new life through Starfleet's desperate need for vessels.[1] Following the war, the class was one of the first types of starships commissioned and operated under the auspices of the newly-established United Federation of Planets.[2] The Daedalus class was also among the first to demonstrate the primary/secondary hull design that would later become characteristic of Starfleet vessels.[3] Unlike most starships, the Daedalus had a spherical main hull.[4] The last ships of this class were—at least officially—taken out of service by the year 2196,[2] though some were later recommissioned and continued serving into the mid-23rd century.[1]

The Daedalus class had a maximum speed of warp 4, and its underpowered impulse drive struggled at sublight speeds. The class mounted first-generation phase cannons and guided missiles with thermonuclear payloads. The simpler design, however, proved an advantage during the Romulan War, as Starfleet could build nearly four Daedalus class vessels in the same amount of time as a single NX class ship, and its simpler systems proved easier to maintain and repair. Upgrades toward the end of the war gave the class greater capabilities by replacing the nuclear warheads with photonic torpedoes and more advanced sensor suites developed in conjunction with the Vulcans and Andorians. Many were decommissioned and mothballed after the war, and were used for parts to maintain those vessels that remained in service. The class would go on to see dozens of minor and major refits over the decades, until the limitations of the spaceframe became apparent and the class was retired in 2196. Increasing hostilities with the Klingon Empire in the 2250s saw several of the ships hastily returned to service, supplementing the fleet until they could be replaced by newer Constitution and Hermes class vessels.[1]