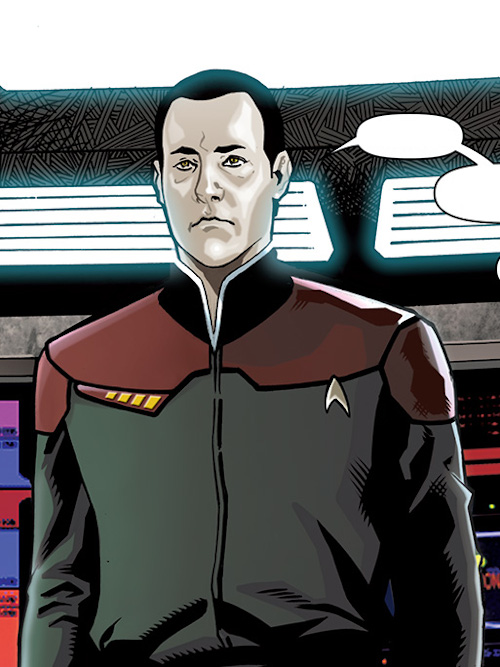 Data was an android created by the renowned cyberneticist Dr. Noonian Soong on a Federation colony at Alpha Omicron in the 2330s. He was deactivated and left on the surface when the colony was attacked by the Crystalline Entity, only to be reactivated some time later by the crew of the U.S.S. Tripoli NCC-19386, which was investigating the colony’s disappearance.[1]

Following their example, Data joined Starfleet,[2] but his application to Starfleet Academy was challenged by Bruce Maddox, on the grounds that he was not a sentient being.[3] Data claimed to have graduated with the "class of 78,"[4] though it was unclear what he meant by that, as he graduated from the Academy in 2340.[5] By 2363, Data had served two years as an ensign, eight years in the lieutenant grades, and thirteen years as a lieutenant commander.[1]

In 2363, Data was posted as the Operations Officer aboard the U.S.S. Enterprise NCC-1701-D under Captain Jean-Luc Picard, and also served as Picard's second officer. Even at this point in his career, many officers believed his rank and position to be honorary. He still had great difficulty with humanoid customs and social skills, though his desire to be more Human was still as strong as ever, leading Commander William Riker to playfully call him Pinnochio.[4]

Though he was an android, his systems mimicked humanoid physiology closely enough that he was even affected by a variant of polywater intoxication, and Data remarked to Captain Picard on this similarity that “[w]e are more alike than unalike, Captain. … If you prick me, do I not… leak?” While under the influence of the virus, Data became intimately involved with Lieutenant Tasha Yar,[6] an experience that remained special to him for many years afterward.[3]

Also that year, the Enterprise returned to Alpha Omicron, where they discovered Data’s "brother" Lore, another android created by Dr. Soong. Lore turned out to be psychotically unstable, and revealed that he was in communication with the Crystalline Entity, which he had led to Alpha Omicron prior to being disassembled by Soong. After he was reassembled by an unsuspecting Enterprise crew, Lore attempted to feed them to the Crystalline Entity as well, but was stopped by Data, who beamed him into space.[1]

Although Data sacrificed himself to save the U.S.S. Enterprise NCC-1701-E in 2379, he copied his memory engrams into his "brother," B-4 beforehand.[7] In time, Data's transferred memory engrams were able to assert themselves within B-4's body,[8] and eventually coalesced into a duplicate of Data’s consciousness at the time of the engram transfer aboard the Enterprise prior to his body's destruction. Unfortunately, B-4's body was unable to handle two separate consciousnesses — Data and B-4 — despite the best efforts of a team of specialists at the Daystrom Institute, led by Geordi La Forge. Despite his apparent lack of sophisticated mental capability, B-4 understood the dilemma he and Data faced, should they continue to share a body. Before anyone could fully comprehend what was happening, B-4 had erased himself from the body's positronic neural network, leaving it solely to Data.[9] Data soon returned to Starfleet, and before long was picked by the retiring Jean-Luc Picard to succeed him as captain of the Enterprise-E, a position he held until the ship was destroyed in 2408.[8]

In 2387, the Enterprise came to the aid of a Romulan Mining Guild vessel, the Narada, which had come under attack by Remans. The Narada's captain, Nero, was working with Ambassador Spock in an effort to stop the destructive effects of a pending supernova of the Hobus star.[10]