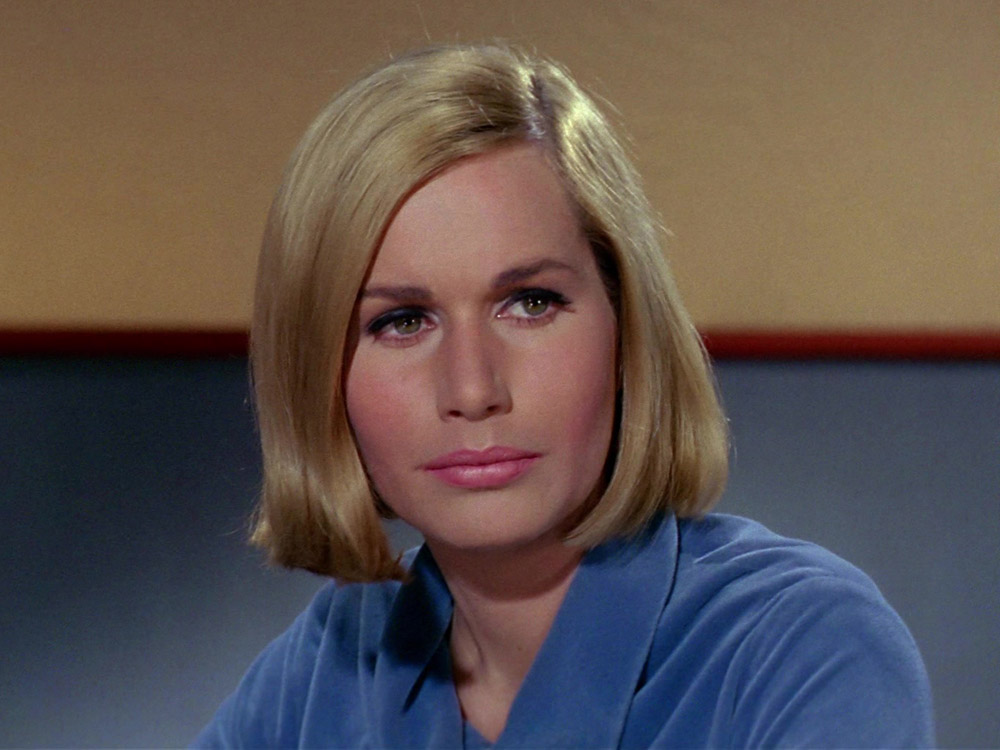 Elizabeth Dehner was born in the city of Delman on Stardate 1089.5. She held a PhD in psychology, and joined the U.S.S. Enterprise NCC-1701 at the Aldebaran Colony prior to its mission to the Galactic Barrier on Stardate 1312.4. Her assignment was to study crew reactions under emergency conditions.[1]

At age 21, when the last ESP test on file in the Enterprise computer was performed, Dehner was 5'2" tall and weighed 116 pounds. Her esper rating was 089. Her aperception quotient was 20/100. Her Duke-Heidelberg Quotient was 258, and her General Knowledge Quotient was 654895-109, which she noted was "rather high." According to her test,[1]

Esper rating and quotients are better than average in all categories. Subject officer's history indicates an esper orientation pattern since childhood, evidenced in superiority at 'guessing games,' reading cards, et cetera. Esper-orientation and abilities are evident through both the maternal and paternal bloodlines, but in only one case does the indicated tendency toward ESP go back more than three generations.

Subject officer has been aware of the high ESP rating since secondary school days and it is, in part, the basis for interest and vocational training as a psychiatrist. Participation in tests and studies of other esper-oriented beings are the subject of a thesis now being published by this officer in association with the College of Medical Sciences of the Tri-Planetary Academy and was, in fact, the reason for this officer’s posting to the Aldebaran Colony.

It must be stressed this officer’s interest in esperperception has been in relationship and pursuant to a vocation as a psychiatrist.[1]

When the Enterprise came into contact with the Barrier, Dehner and Lieutenant Commander Gary Mitchell, the ship's navigator, were rendered unconscious by an unknown force, which ultimately resulted in their gaining godlike mental powers. Dehner opposed taking action against the rapidly mutating Mitchell, as she believed that "a mutated, superior man could be a wonderful thing; a forerunner for a better kind of human being." Mitchell, an old friend of Captain James T. Kirk, had been driven mad by the power, and Dehner, who had begun to mutate as well, sacrificed her life to help Kirk kill Mitchell to prevent him from wreaking havoc on the galaxy. Kirk recorded that she "gave her life in the performance of her duties," and noted that they didn't ask for what had happened to them, and that he wanted their service records to end that way.[1]