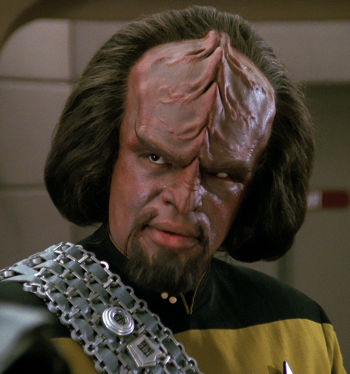 A humanoid, mammalian warrior society[1] from the planet Qo'noS (often transliterated as Kronos),[2] Klingons first encountered Humans in 2151, when a Klingon courier crash-landed on Earth.[3]

Outwardly, Klingons looked very similar to Humans, though the range of Klingon skin pigmentation was generally darker than that of most Humans; Klingons also had cranial[4] and spinal[5] ridges. Internally, Klingons were significantly different from Humans. Nearly every vital body function had multiple redundancies, which the Klingons called brak'lul; this gives Klingon warriors enormous resiliency in battle.[5] In addition to an eight-chambered heart and twenty-three transverse ribs[5] due to brak'lul, Klingons also had redundant stomachs.[6] Klingon blood was a lavender color,[2] which darkened to a deep reddish-brown when dried.[7] Klingons also had no tear ducts.[2]

Following an attack on the Qu'vat Colony by Human Augments in 2154,[8] the Klingons attempted to create a breed of Augments of their own, using DNA samples taken from the wreckage of a Bird of Prey that had been seized by the Human Augments and destroyed in orbit of the Qu'vat Colony.[9] Unfortunately, one of the Klingons selected for the procedure had the Levodian flu, which caused the Augment DNA to mutate into a lethal, airborne virus. The Klingons, in concert with Section 31, kidnapped Doctor Phlox of the Enterprise NX-01, hoping he could find a cure to what had become a plague that threatened to sweep through the Klingon Empire, and also allow the Augment program to succeed.[9]

Phlox, however, tricked the Klingons, and although he cured the disease, the result was that the Klingons retained many Human features (though their internal organs remained unchanged), but none of the enhanced Augment abilities.[10] It would take more than a century for the Klingons to reverse the changes to their genome and restore their appearance.[4] The Klingons were so shamed by the debacle that they refused to discuss it with outsiders, and by the late 24th century, the fact that Klingons once had a large percentage of their population who had a Human-like appearance was largely forgotten.[11]

Most Klingons lived according to a complex system of social customs, originally set down by Kahless the Unforgettable,[12] that placed an individual's honor above all other considerations.[13] A Klingon's honor reflected not only on himself, but also his immediate family and fellow House members.[14] Running from battle, killing prisoners, using poisons, breaking one's sworn word, and disloyalty to family, House, and superiors were among those actions that Klingons considered to be dishonorable.[15] Klingons tended to speak proudly; they did not typically whisper or keep their distance, as doing so could have been interpreted as an insult in Klingon culture.[16] This aggressive culture made the Klingons an interstellar military power to be both respected and feared.[1][17]

According to myth, ancient Klingons slew their gods in the 14th century (Earth calendar); the Klingons believed their gods to be “more trouble than they were worth,” according to Worf in 2372.[18] As a result, there was no longer an equivalent of the devil in Klingon mythology in the 23rd century,[17] although a beast known as Fek'lhr[19] was believed to guard the underworld of Gre'thor, where the dishonored would go after death.[19][20] Although Klingons continued to believe in an afterlife, there was no burial ceremony; a dead Klingon's companions would pry open his eyes and emit a bellowing cry as a warning to others that a warrior was entering the afterlife.[13] Afterward, the body would be disposed of in the most efficient means possible,[21] other Klingons now confident that the warrior's spirit had left an empty shell and joined Kahless in Sto-Vo-Kor.[12] As a result, Klingons did not mourn the death of a warrior who had died honorably in battle, believing the spirit to have been freed.[22] A dishonorable death, including suicide, however, meant that the dead Klingon's spirit would not travel across the River of Blood to Sto-Vo-Kor, but would instead be delivered by the Barge of the Dead to the gates of Gre'thor.[20]

Klingon culture had many traditions and rituals. A blow from the back of the hand could be interpreted as a challenge to fight to the death,[16] while one delivered to the face by the heel of one's palm could indicate the start of a mating ritual.[23] Klingons believed that they possessed an instinctive ability to look an opponent in the eye and see the intent to kill.[24] A young Klingon was considered to be a man on the day when he could first hold a blade.[5] Klingon medical technology often suffered, in part, due to cultural biases that injured warriors should be left to die or carry out the Hegh'bat, a ritual that involved a close friend or family member killing a grievously wounded Klingon, so that he could die honorably.[5] The R'uustai ceremony bonded two individuals' families together, making them, legally, siblings.[22] Other rituals and traditions included the Day of Honor, the Rite of Ascension, the Kal'Hyah, and the tea ceremony. These were designed to prove a Klingon's strength and endurance — key qualities of a successful warrior.[25]

Klingon society was divided into four tiers. At the top was the nobility, the lords of Houses great and small. Their authority was derived from their control over their lands and the armies at their command. Generally presumed to be the most honorable, the nobility enjoyed the most power and privileges in society. The second tier was formed by the warriors, who sought admission into the militaries of the Houses. The third tier consisted of the healers, accountants, weapon-smiths, nursemaids, and countless other professions necessary to keep society functioning. Generally, this tier consisted of those Klingons who were refused induction into a House's army, although some chose to continue a family business. The fourth tier encompassed the jegh'pu'wI — inhabitants of planets conquered by the Empire.[25] Those Klingons who had no honor, and had been banished from the Empire — a process known as discommendation[14] — had no place in this social order.