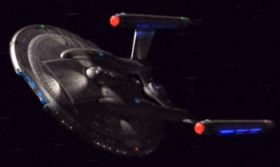 The United Earth Starship Lexington, an NX class vessel, was commissioned in 2155, just as the Romulan War began. In June 2156, when a Romulan invasion of the Sol system appeared imminent, the NX class vessels, including the Lexington, were not recalled to aid in the system's defense. On 10 January 2160, the Defiant and the Enterprise NX-01, leading a Coalition of Planets task force, set course for Cheron, with a mission to destroy the Romulan shipyards located there. This Battle of Cheron was actually a feint, distracting the bulk of the Romulan fleet away from Romulus, while it was attacked by a second force led by the Lexington. Even before the task force arrived at Romulus, Praetor Gileus, panicking after realizing that the forces he'd ordered recalled from Cheron wouldn't reach the homeworld in time, contacted Earth via subspace radio to open negotiations for a peaceful end to the war.[1]