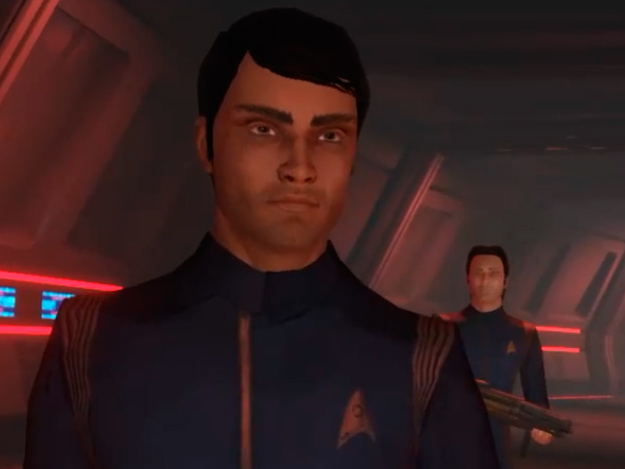 Astromycologist Justin Straal developed the spore drive with his colleague, Paul Stamets. They agreed to let Starfleet help develop the technology, and an entire class of starships, the Crossfield class, was designed around the experimental drive. Soon after the ships were launched in 2256, war broke out with the Klingon Empire. Development of the spore drive was deemed a military priority, and Straal and Stamets — now lieutenants in Starfleet — were split up between two ships in the hope that it would accelerate their work; Straal was assigned to the U.S.S. Glenn NCC-1030, and Stamets to the U.S.S. Discovery NCC-1031.[1]

After responding to a distress call from Delta Volanis Station in mid-2256, the Glenn was boarded by Klingon forces led by J'Ula, the matriarch of House Mo'Kai, who stole classified data on the spore drive. Straal managed to corrupt many of the files, but J'Ula managed to escape with the data, and Glenn pursued.[2] While J'Ula was unable to use the data to create a spore drive of her own, she was nevertheless able to devise a devastating mycelial weapon that she used to attack Starbase 1 a few weeks later. While it seemed at the time that J'Ula's ship, the I.K.S. Lukara, and several other ships in its vicinity were destroyed when the weapon was fired, they were actually transported more than 150 years into the future.[3] Sadly, Straal and the entire crew of the Glenn were killed in November 2256 when the ship's spore drive malfunctioned.[1]