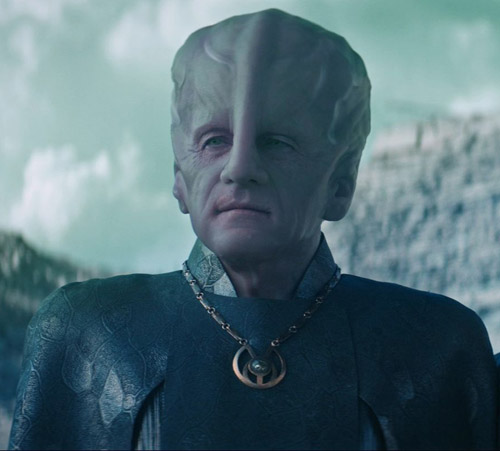 Referred to as "magistrate" by other Talosians, the "Keeper," as he was referred to by Captain Christopher Pike, served as a spokesperson for the Talosians when dealing with Pike and their other Terrans captives in 2254. The Keeper wore an authoritative-looking jeweled pendant around his neck, possibly as a symbol of authority. When the Talosians realized that Humans would not be able to adapt to a life in captivity, no matter how pleasant or benevolent, the Keeper released them.[2] Shortly afterward, Terran Emperor Philippa Georgiou ordered the orbtal bombardment of Talos IV in order to kill all of the Talosians "and their stupid, Talosian singing plants.[3] Given the nature of Talosian mental abilities, it is unclear whether the attack was successful.