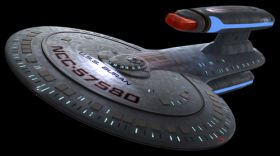 In 2373, the Challenger class[1] Starship Armstrong and the U.S.S. Drake NCC-70956 were ambushed by a Klingon battle group, and the two ships took heavy casualties. After the battle, the ships docked at Deep Space 9 to receive medical aid and make repairs.[2]

At the beginning of the Dominion War, Zelik Leybenzon was assigned to the Armstrong as an enlisted security officer. He later received a field promotion after repairing a damaged phaser bank that had been written off by the chief engineer and chief of security.[3]