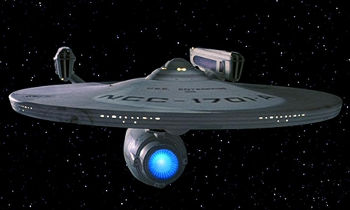 The second Federation starship to bear the name, the Enterprise was, like its predecessor, a Constitution class vessel, launched on Reference Stardate 2/2210.15 (15 October 2285)[1] and placed under the command of the recently-demoted Captain James T. Kirk by the Federation Council and Starfleet Command in appreciation for his role in saving Earth from the destructive effects of an alien probe.[2] The new Enterprise was, in fact, a contemporary of her predecessor; the ship was recommissioned the U.S.S. Enterprise NCC-1701-A by a special act of the Federation Council;[3] prior to that, the ship was the U.S.S. Yorktown NCC-1717.[4][5] The flagship of Starfleet and a key ambassador of the Federation, the Enterprise symbolized the spirit of discovery and adventure that drove the Federation to seek that which was just beyond its reach.[6]

Although shakedown tests and systems installation under the aegis of Captain Montgomery Scott had not been completed following the vessel's refit in the wake of the Cetacean probe crisis, the Enterprise was rushed into service in early 2286 to intervene in a hostage situation at planet Nimbus III.[7] In 2293, the ship had been placed on reserve status, but was pressed back into active service to escort Klingon Chancellor Gorkon to Earth for an historic peace conference. Although the scheduled talks were canceled after Gorkon was assassinated, the Enterprise and her crew were instrumental in the success of the Khitomer peace conference shortly thereafter.[8] The Enterprise was scheduled to be decommissioned shortly after the Khitomer Conference due to the massive damage the ship received during its battle with a rogue Klingon Bird-of-Prey in orbit of Khitomer, but was allowed to remain in service a few months longer after the majority of the damage was repaired by Captain Scott and his engineering staff.[9]