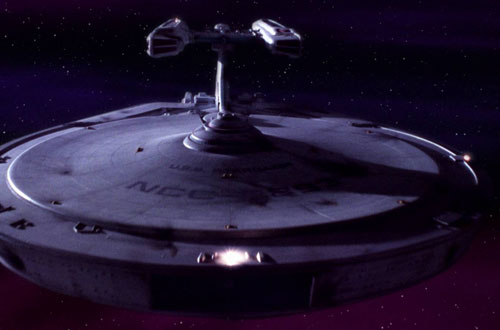 In 2233, Lieutenant Jean-Luc Picard took command of the Federation Starship Stargazer, a Constellation class cruiser, when the ship's captain was killed, and was later offered a permanent promotion and command of the vessel for his actions.[1] Picard remained in command of the Stargazer for more than two decades.[2]

During an exploratory mission to Sector 21503, the Stargazer was attacked by Cardassian forces, and barely escaped.[3] In 2354, the Stargazer visited Chalna.[4] On Stardate 40217.3[2] the Stargazer was apparently destroyed near the Maxia Zeta system by what was later learned to be a Ferengi vessel. Captain Picard's final log entries stated:

"Proceeding at warp 3.4. Chief Engineer reports nominal completion of maintenance of #2 impulse reactor a full day ahead of schedule. I have therefore ordered a full power test on the entire system in hopes of recertifying the reactor before next week. It will be good to have impulse back to full capacity. ...

U.S.S. Stargazer on routine survey mission into the Maxia Zeta star system. Initial scans indicate twelve planets, none habitable. The third and fourth are in Maxia Zeta's habitable zone, and may therefore be candidates for terraforming. Our science teams are preparing for a full survey and sensor scan. ...

We have detected an unidentified spacecraft near one of the moons of Maxia Zeta IV. Indications are that this craft may have been launched from that moon, although our scans have detected no launch complex or other support facility. We are attempting to hail the craft, but as yet there has been no response. ...

We are under attack by an unidentified starship. Repeated attempts to warn it off have failed. I fear that we have no choice but to defend ourselves. ...

We are forced to abandon our starship. May she find her way without us."[5]

Nearly a decade later on Stardate 41723.9, DaiMon Bok returned the ship's remains to Picard, now in command of the U.S.S. Enterprise NCC-1701-D, as part of a revenge plot against Picard for his part in the death of Bok's son, who commanded the Ferengi ship that the Stargazer had originally encountered.[2]