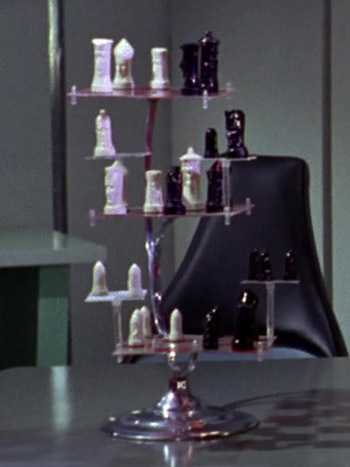 Chess was a game of strategy that had its origins on Earth. While originally conceived as a two-dimensional game, by the 23rd Century, a three-dimensional variant of the game had become popular. James T. Kirk and Spock frequently played chess together, and the Vulcan was often surprised by his friend's illogical—but effective—strategies.[1] "In chess," Spock once observed, "when one is outmatched, the game is over. Checkmate."[2] When Charlie Evans insisted on playing a game of chess against Spock — and inevitably lost within a few moves — he became angry and used the powers given to him by the Thasians to melt Spock's chess pieces.[3]