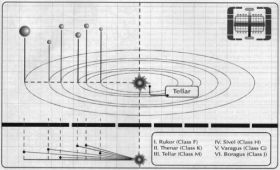 The 61 Cygni system,[2] also known as the Tellar system, consists of six planets[3] orbiting a binary pair of Type K stars in the Tellar Sector (aka Sector 007) of the Alpha Quadrant.[2] The Tellarite homeworld, Tellar Prime,[4] is the fourth planet in the system.[5] The system's other planets are Rukor (61 Cygni I, Class B), Thenar (61 Cygni II, Class N), Sivel (61 Cygni III, Class K),[Notes 1] Varagas (61 Cygni V, Class C), and Boragus (61 Cygni VI, Class J). Boragus also has five moons, three of which are home to Tellarite colonies.[3]

Only Thenar remains unsettled.[3] The first Tellarite astronaut, a scientist named Ranx, designed his own, experimental spacecraft in the Earth year 1867. Ranx died when the ship crashed on Thenar, but he became the first Tellarite to enter the atmosphere of another planet.[6] Thenar proved too difficult to terraform and settle, although it was once home to several mining operations.[3]

By 1892, the Tellarites had begun to conquer their star system. Colonies were established on Rukor, Sivel, and Varagas, as well as on three of Boragus' moons. Tellarites then spent the next fifty years improving these colony outposts, so that they could survive any disaster.[6]