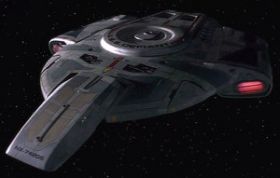 The Starship Defiant, a close copy of the Federation starship of the same name from the Prime Universe, was constructed by the Terran Resistance in the Mirror Universe for use in their struggle against the Klingon-Cardassian Alliance, using technical information on the Defiant class downloaded by Miles "Smiley" O'Brien during his visit to the Prime universe's Deep Space 9 in 2371. "Smiley" was able to download the schematics from Deep Space 9's computers and brought them back to the Mirror Universe, where construction began at Terok Nor, which had come under rebel control. While construction proceeded well with materials stolen from the Alliance, the Defiant's powerful warp core nearly caused the ship to shake itself apart during test flights. With an Alliance fleet on its way to retake the station in 2372, O'Brien enlisted the help of Professor Jennifer Sisko to bring Captain Benjamin Sisko into the Mirror Universe, so that he could solve the problems on the Defiant. Sisko was able to iron out the problems and even commanded the Defiant in the Battle of Terok Nor against Regent Worf's fleet, helping to turn the tide in the war against the Alliance.[1]

In 2374, the Defiant pursued Ezri Tigan and Brunt and repelled an attack by the Alliance.[2] A few months later, Rebel Generals Zek and Julian Bashir gained the resources to build twenty-four more Defiant class warships at their new shipyard at Empok Nor. Twelve of these were made, including the Capital Gain, Jadzia and Terra Victor. However, eleven were lost in the explosion that destroyed Empok Nor, and the Capital Gain was disabled. The remaining warships were built some time later by O'Brien as part of his plan for a quadrant-wide revolution against the Alliance.[3]