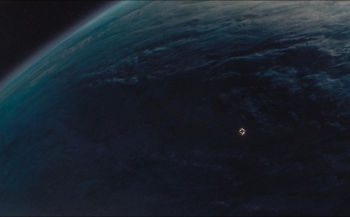 On Stardate 2258.42, James T. Kirk was left on the moon near Starfleet Outpost Hunter[6] by Spock, the acting captain of the U.S.S. Enterprise NCC-1701. While on the surface, Kirk encountered both Lieutenant Commander Montgomery Scott, who was assigned to the station, and Spock (Prime), who had been marooned there by Nero.[2]