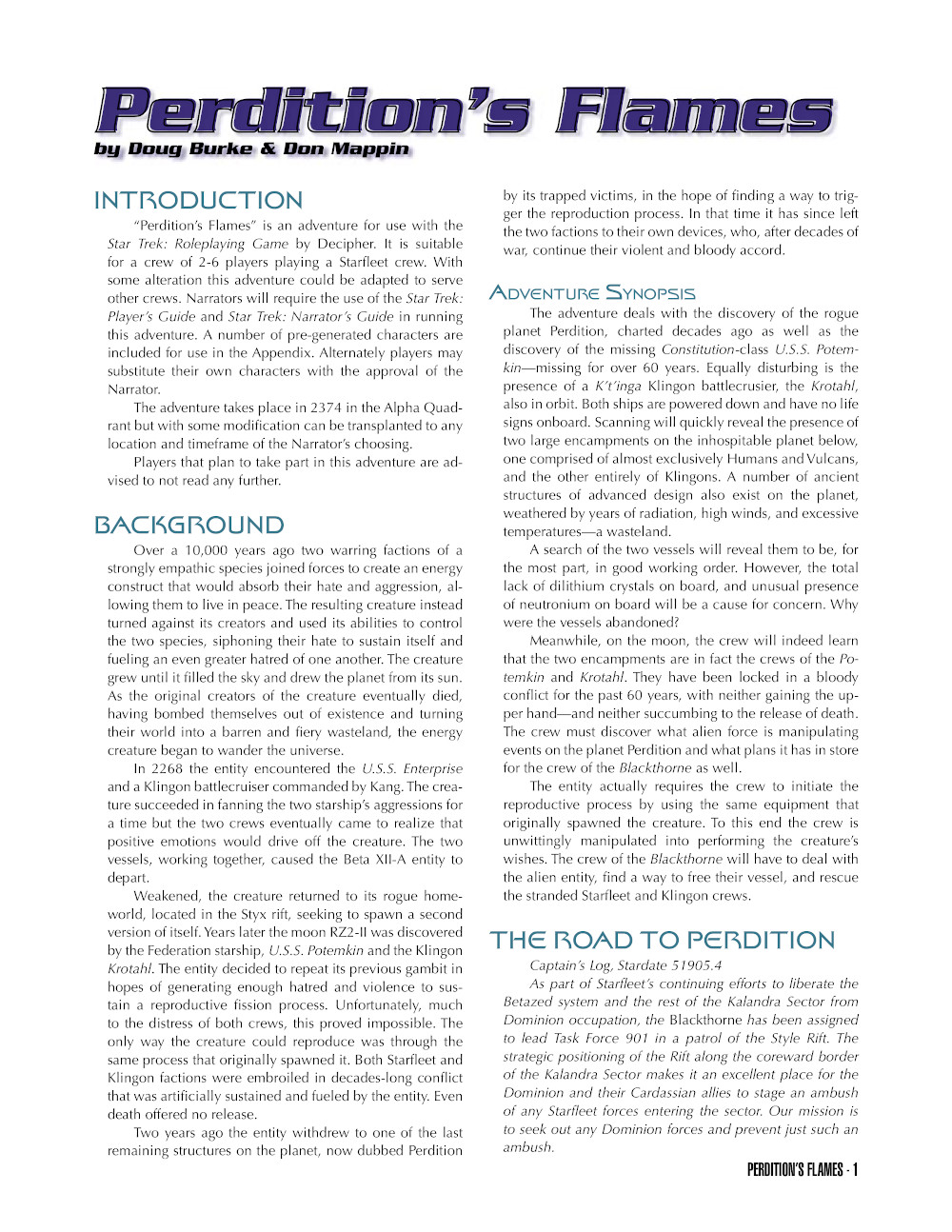 Cover
Captain's Log
Stardate 51905.4: As part of Starfleet’s continuing efforts to liberate the Betazed system and the rest of the Kalandra Sector from Dominion occupation, the Blackthorne has been assigned to lead Task Force 901 in a patrol of the Style Rift. The strategic positioning of the Rift along the coreward border of the Kalandra Sector makes it an excellent place for the Dominion and their Cardassian allies to stage an ambush of any Starfleet forces entering the sector. Our mission is to seek out any Dominion forces and prevent just such an ambush.

The adventure deals with the discovery of the rogue planet Perdition, charted decades ago as well as the discovery of the missing Constitution-class U.S.S. Potemkin — missing for over 60 years. Equally disturbing is the presence of a K't'inga class Klingon battlecrusier, the Krotahl, also in orbit. Both ships are powered down and have no life signs onboard. Scanning will quickly reveal the presence of two large encampments on the inhospitable planet below, one comprised of almost exclusively Humans and Vulcans, and the other entirely of Klingons. A number of ancient structures of advanced design also exist on the planet, weathered by years of radiation, high winds, and excessive temperatures—a wasteland.

A search of the two vessels will reveal them to be, for the most part, in good working order. However, the total lack of dilithium crystals on board, and unusual presence of neutronium on board will be a cause for concern. Why were the vessels abandoned?

Meanwhile, on the moon, the crew will indeed learn that the two encampments are in fact the crews of the Potemkin and Krotahl. They have been locked in a bloody confl ict for the past 60 years, with neither gaining the upper hand—and neither succumbing to the release of death. The crew must discover what alien force is manipulating events on the planet Perdition and what plans it has in store for the crew of the Blackthorne as well.

The entity actually requires the crew to initiate the reproductive process by using the same equipment that originally spawned the creature. To this end the crew is unwittingly manipulated into performing the creature’s wishes. The crew of the Blackthorne will have to deal with the alien entity, find a way to free their vessel, and rescue the stranded Starfleet and Klingon crews.