From Trekipedia
Jump to navigation Jump to search
U.S.S. Cortez 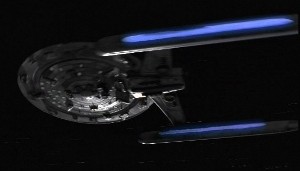 The Centaur class Starship Cortez, commanded by Captain Quentin Swofford, was part of a task force commanded by Captain Benjamin Sisko to retake station Deep Space 9 during the Dominion War in 2374's Operation Return. The Cortez had trouble with the guidance thrusters on the port nacelle. The ship was ordered to fall back, and its position in the fleet was filled by the U.S.S. Sarek.[1] The Cortez later was one of the first ships to break through the Dominion fleet, which it reported was in retreat; it was later ordered to rendezvous with the rest of the Federation fleet at Deep Space 9.[2] The Cortez was reported missing while patrolling the border, and was presumed to have been destroyed by the Jem'Hadar. The U.S.S. Defiant NX-74205 searched the area for survivors for nearly six hours.[3] Named for Hernan Cortez, the Spanish conquistador who overthrew the Aztec empire and won Mexico for Spain.