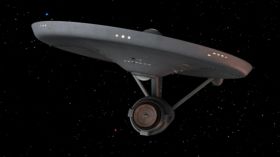 Construction on the Federation Starship Republic, a Constitution class vessel, was authorized by the Star Fleet Appropriation of Stardate 0965.[1] The Republic was commissioned on Reference Stardate 1/8805 (May 2188).[2] James T. Kirk served aboard the Republic as a cadet. While aboard the vessel, he befriended an older officer, Lieutenant Ben Finney, but that friendship didn't prevent Kirk from logging an incident in which Finney left a circuit to the vessel's reactor core open, endangering the ship. The incident report caused Finney to be moved to the bottom of the promotions list, and resulted more than a decade of enmity from the older man.[3] The Republic was commanded at the time by Captain Percy Stone. Following a dispute with a Klingon Kl'ar class vessel over the exact boundaries of the Neutral Zone, the Republic limped back into port at Tellar, having suffered damage to its deflector shields and hull. Kirk would recount to his friend, Lieutenant Jose Dominguez, that the Klingons lost artificial gravity before they were forced to withdraw.[4]

The Republic, now commanded by Captain Richard V. Masterson, was officially declared lost on Reference Stardate 2/0808.26 (26 August 2208), although it was believed that the ship may have been missing as many as seven months prior to that.[6] Fifteen years later, on Stardate 8087.3[7] (Reference Stardate 2/2304 (April 2223)[6]), the Republic was discovered in the Styx Rift by the U.S.S. Excalibur NCC-1711; the crew had been taken over by the same species of neural parasites that attacked Deneva in 2209, but fast thinking by the ship's science officer, Lieutenant Commander Xepesna, left the ship stranded in the rift. At the time of its disappearance, the Republic crew included first officer was Commander Talia Janovich. Lieutenant Chal'n Dax served as chief helmsman, and Doctor T'Narra was chief medical officer; Lieutenant Commander Bahrrr was the ship's chief engineer, Lieutenant R'Randrr was the communications officer, and Lieutenant Juliet Rodriguez was the ship's assistant science officer. Due to the effects of relativistic sublight travel, the crew experienced a far shorter span of elapsed time than fifteen years.[7] During the years in which the Republic was believed to have been destroyed, a new vessel bearing the name was commissioned.[2]