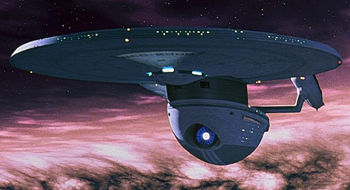 In 2285, the U.S.S. Excelsior NX-2000, the first of a new class, was commissioned. The newest vessel in Starfleet at the time, it incorporated many experimental systems, including the transwarp drive, earning it the nickname "The Great Experiment"[1] among those in influential circles. With so many new systems aboard these vessels, the process of testing them was slow. Prior to being installed, each component was tested and retested until it met standards. Nevertheless, when the Excelsior was taken out for trials, the evaluation teams were constantly faced with primary system malfunctions that would not allow any of the secondary or backup systems to be tested. This caused the evaluators to deal with these new components on a one-at-a-time basis, thus creating time delays in the commissioning of the class.[2]

The Excelsior class underwent a number of late design changes when the transwarp project ultimately failed. While transwarp was never realized, designers were unwilling to cast aside what was otherwise a sound cruiser design. The transwarp engines were removed in favor of conventional warp drive engines. The Excelsior class could cruise at Warp 8 (OCU), sustain speeds of Warp 10 (OCU) for several hours, and reach Warp 13 (OCU) when necessary. This made it by far the fastest Starfleet vessel for almost five decades.[3]

A state-of-the-art capital ship with impressive size, speed, and tactical characteristics, the Excelsior class was well-suited for a number of mission roles. Specializing in emergency response and long-range exploration, the Excelsior class also distinguished itself through superior firepower and the ability to project force into neighboring sectors. They served as the mainline fleet vessel for Starfleet after the retirement of the Constitution class, and before the wide-scale use of Ambassador class ships. They frequently operated as command and control vessels, dictating fleet actions. A number of scientific laboratories and the ability to launch long-range probes also made the class viable for exploration and scientific missions. As a support vessel, the ship's sensor capabilities were average for its class, while its operations and computer systems were top of the line. A large shuttlebay and ample cargo room gave the class the ability to operate in a number of auxiliary roles, such as colony supply, emergency relief, and deep-space surveying missions.[3]

The flagship of Starfleet, the U.S.S. Enterprise NCC-1701-B, was commissioned as an Excelsior class vessel,[5][6][7] while the Excelsior herself went on to a fine and distinguished career under Captain Hikaru Sulu.[8] The U.S.S. Gorkon NCC-40521 and U.S.S. Cairo NCC-42136, commanded by Captains Nechayev and Jellico, respectively, saw extensive action against the Tholians and Cardassians in a number of conflicts.[3]

Tactically, the Excelsior class was the most powerful Starfleet vessel fielded during the 23rd and early 24th centuries. Mounting several Type-VIII phaser banks, the Excelsior's firepower provided it with excellent strike capabilities. The addition of Mk 22 direct-fire photon torpedoes allowed the class to lay down multiple fields of fire. Supplemented by the proven CIDSS-2 shield system, the class enjoyed significant combat endurance.[3]

During the Cardassian and Dominion wars, the Excelsior class was an oft-seen combatant on the front lines. Excelsior class cruisers fought at the Chin'toka, Archanis, and Bolian sectors, to name a few, in the latter parts of the Dominion War.[3]