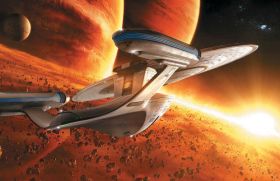 Lead vessel of the Ambassador class,[1][2] the Federation Starship Ambassador was commissioned in 2322.[3]