The Federation Starship Enterprise was an Ambassador class cruiser commanded by Captain Rachel Garrett[1] from 2340 through 2344.[2] The Enterprise was destroyed by Romulan forces while defending a Klingon colony at Narendra III in 2344. Although the starship was equipped with state-of-the-art weaponry and defensive systems, it was no match for the combined power of four Romulan warbirds.[1] 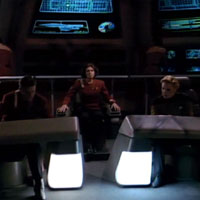 During its defense of Narendra III, the Enterprise entered a temporal rift and traveled 22 years into the future. Most of the senior staff were killed during the initial encounter with the Romulans, but Captain Garrett and Lieutenant Richard Castillo survived. In this future, the Federation was at war with the Klingons. However, it appeared that this timeline had occurred because the Enterprise was unable to complete its defense of the Klingon outpost before it entered the rift. When the starship returned to its own time and completed its final mission, the war was averted before it had ever begun.[1] Later accounts proved that there were, in fact, some survivors of the battle, who were captured and taken to Romulus.[3]

After traveling through the temporal rift, the Enterprise found itself not in 2344, but even further in the future, in 2409. The ship was captured by Tholians, who had conquered much of what had once been the Federation after it was defeated by the Klingon Empire. The Enterprise crew, aided by another subject of the Tholians, managed to retake their ship. Intervention by a Wells class timeship from the 29th century allowed the Enterprise to return to 2344 at last, while their colleague from 2409 was reintegrated with their counterpart from the restored timeline.[4]