From Trekipedia
Jump to navigation Jump to search
Lazarus 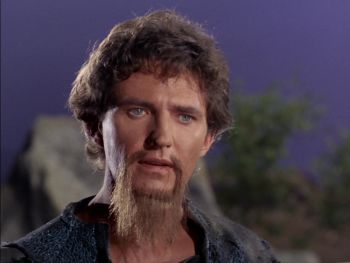 On Stardate 3087.6, Commodore Barstow ordered the U.S.S. Enterprise NCC-1701, under the command of Captain James T. Kirk, to investigate moments of galaxy-wide "nonexistence," which Starfleet Command believed to be a potential prelude to invasion from an alternate universe. In fact, the people from a so-called Antimatter Universe attempted to make contact with their counterparts in another reality, and the contact between the two realities devastated both planets, rendering them lifeless. Lazarus, who claimed that he was in a space vehicle inspecting communication satellites at the time, was spared the devastation, as was his counterpart from the other reality.

Driven mad, Lazarus took it upon himself to destroy the "monster" that he blamed for his world's destruction. He told Kirk that his ship was capable of traveling both in time and space, as well as between universes, and that he had chased his counterpart for many years. The two met briefly in a negative magnetic corridor between realities before switching places in each reality, and fought one another each time. The "antimatter universe" Lazarus, with Captain Kirk's help, trapped himself and his counterpart in the corridor, saving both realities but condemning the men to an eternal battle.[1]