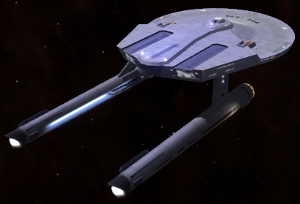 First commissioned in April 2245 during the period known as "The Great Awakening," the Miranda class cruiser was in the forefront of that expansion effort.[2] A Starfleet fixture of long-range scientific, supply, and exploratory missions for nearly a century, Miranda class vessels probably logged more parsecs than any other single Federation vessel class. During the period of the Miranda class's development, Starfleet Command placed an increasing emphasis on deep space exploration and surveying.[4] At the time, Starfleet itself was expanding in response to the changing and expanding economic and political goals of the Federation. To meet the demands of a larger navy, the Military Appropriations Committee authorized the development and testing of hundreds of vessel types, the Miranda class among them.[2] The first ships launched after the inception of this exploratory vessel initiative, Miranda class vessels represented the most notable result of Starfleet's renewed focus on exploration and discovery.[4]

During this same period, the concepts of ship design were rapidly evolving and becoming more sophisticated, and the technology to build and operate starships was undergoing a revolution. Advances in all facets of the technologies required to construct, maintain, and operate a starship were changing so rapidly that some ship designs were obsolete before they were even completed. The Miranda design was changed no fewer than twelve times before the tooling and machining was begun. Even so, the ship required some alterations during its trials and was to see many more changes after its commissioning.[2]

When first launched, the Miranda class cruisers were only able to perform three-year missions, with resupply at one-year intervals. This made their dual-purpose role of research cruiser harder to perform. With the great distances that had to be traveled, they could not get more than six months' travel from a friendly outpost, which meant that they could only advance as fast as the frontier itself was expanding.[2]

Merging a host of diverse capabilities, versatility quickly became a hallmark of the class. Although Miranda class ships primarily undertook scientific and exploratory missions, certain systems modules were swappable. These Miranda class variants enjoyed great popularity in the early 24th century, and their expanded tactical and defensive systems were more than a match for most foes. Ships of the class participated in every major battle of the 24th century, often serving on the secondary or reserve lines.[4] 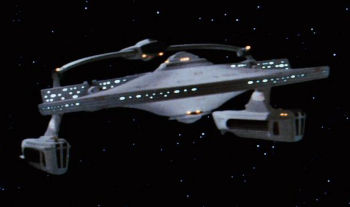 In October 2272, the U.S.S. Reliant NCC-1864 was brought into the shipyards at Morena for a refit to the Anton-type Mark IV specifications. As the ship was being dismantled for an engine refit, Starfleet Command decided to mount the newer model of warp and impulse engines, instead of the model normally used for the Mark IV. This change necessitated many exterior design modifications that ultimately resulted in the Mark I Reliant-type design specifications.[2]

During the Four Years War, the Miranda class suffered from a lack of intense firepower, resulting in sixteen ships lost due to their inability to deliver massive blows to their targets. This was remedied by the addition of a "rollbar" weapons pod, which gave better field of fire and allowed the mounting of photon torpedoes. Miranda class ships were produced at the Morena, Mars, and Salazaar shipyards, at a rate of ten per year.[2] In the 24th century, the Miranda class would also be produced at the Starbase 134 Integration Facility on Rigel VI.[6]

By the middle of the 24th century, Starfleet decommissioned many Miranda class vessels and sent them to surplus depots, scrapped them for parts, or used them as training vessels. Federation member planets and allied systems, such as Altair and Betelgeuse, first began to add reconditioned Miranda class ships to their own fleets in the 2360s, when the active production life of the class ceased. Hence, many Miranda class vessels continued to serve with distinction throughout Federation space and beyond for decades after their theoretical obsolescence.[4]