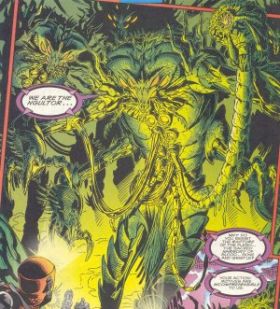 The Ngultor, who originate from a distant part of space, believe that "the blending of the flesh—the cohesion of species into species—life into life—achieving a single union of wholeness, is a blessed state to be striven for." The Ngultor ship and mothership encountered by the U.S.S. Enterprise NCC-1701 in 2254 were stranded in Federation space by a warp drive malfunction. They captured several ships for spare parts from the crews before attempting to do the same with the Enterprise. They planned to send harvester vessels to Federation worlds following their return to their home territory, forcing Captain Christopher Pike to destroy them.[1]