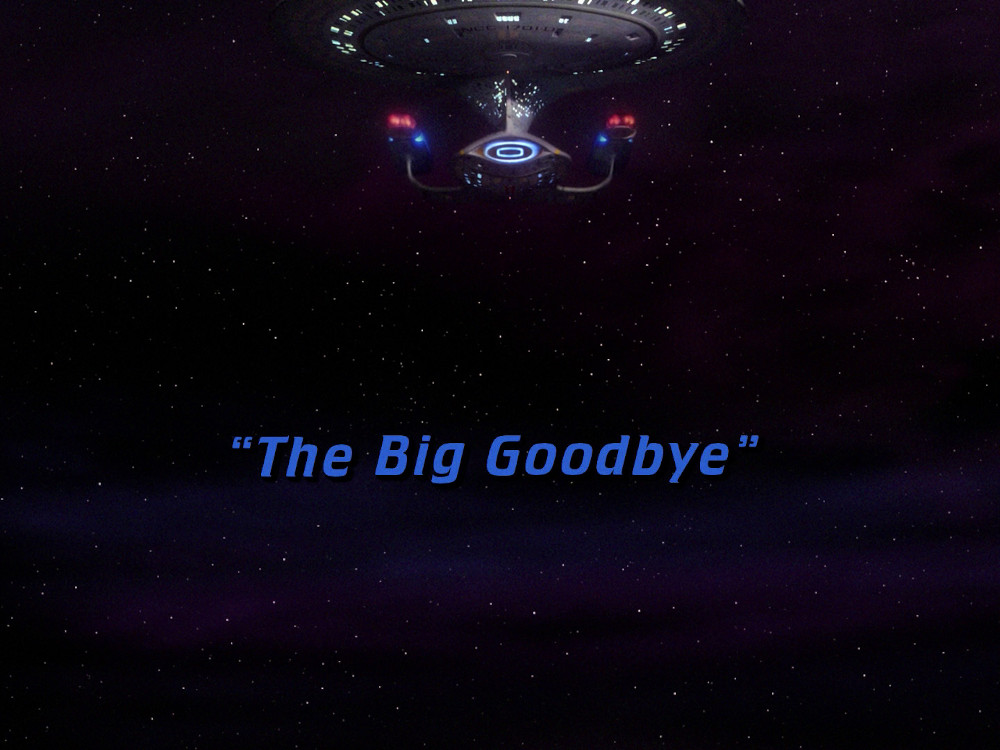 Stardate 41997.7: Picard and crew are trapped on the holodeck.

Protocol is everything to the insectoid Jarada, who insist that they be greeted successfully in their own language without fail before diplomatic relations can begin. It has been twenty years since the Federation last tried to contact them, and the demise of the Starfleet vessel that failed is a tale so horrible that no one wants Data to repeat it.

To relieve the stress of his preparations, Captain Picard tries a little role-playing in his favorite holodeck program, "The Big Goodbye:" a 1940s-era hard-boiled detective novel starring Dixon Hill. He is so excited after a short holodeck visit that he takes Data, Dr. Crusher, and ship's historian Whalen back with him. But a long-range Jaradan scan interferes with the holodeck's programming, and the game turns deadly: Whalen is shot by mobsters, and the party is trapped with no exit. Acting Ensign Crusher and Lieutenant, j.g. La Forge try to make repairs, but a wrong move could kill everyone inside the holodeck.

The holodeck is finally opened, and the mobsters gleefully leave, intending to plunder the Enterprise and its futuristic technology, but they dematerialize after leaving the confines of the simulated environment. Lieutenant Bell, Hill's friend on the police force, ponders about reality for the holodeck's inhabitants as he watches the Enterprise crew leave. Still in his trench coat, Picard travels straight to the bridge and delivers the Jaradan greeting perfectly, to the crew's applause.