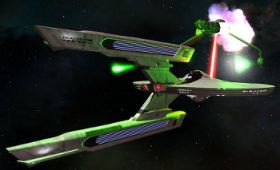 The Apollo class[1] Starship Ajax saw service in the 24th century.[2] In the 2320s, the Ajax was commanded by Captain Narth;[3] in 2327, Ensign Cortin Zweller was assigned to the Ajax after graduating from Starfleet Academy.[4]

After Zweller stopped a Tzenkethi saboteur aboard the Ajax in 2329, he was approached by Section 31.[3] By 2333, Zweller had advanced to the position of second officer aboard the Ajax.[5]

In 2364, the Ajax was one of several Federation starships selected to receive warp drive enhancements from engineering specialist Kosinski and his aide, the Traveler; the Ajax's chief engineer noted a rise in engine effieciency, though it was later revealed that the effect was due to the Traveler and had nothing to do with Kosinski's new warp equations.[2]

The Ajax was one of 23 starships that formed part of a tachyon detection grid in 2368, when Captain Jean-Luc Picard of the U.S.S. Enterprise NCC-1701-D established the network along the Klingon-Romulan border in order to expose the Romulans' involvement in the Klingon Civil War.[6]

The following year, the Ajax performed a deep space exploration mission into Sector 21396.[7]