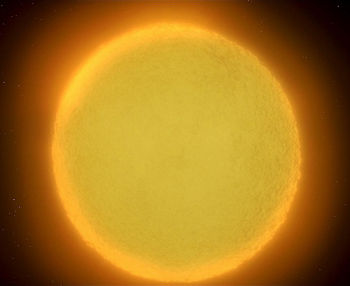 Alpha Centauri, also known as Al Rijil,[2] was a trinary system consisting of two yellow stars and a red dwarf. The two yellow stars, Alpha Centauri A and B, were orbited by seven planets. The fourth, fifth, and seventh planets were all Class M, and all were inhabited by the 23rd century; the seventh planet was home to an indigenous humanoid civilization[1] when it was contacted by the U.N.S.S. Icarus in 2048, and the fourth and fifth planets were colonized by the Centaurans.[2] It was later postulated that the inhabitants of the seventh planet, known simply as Alpha Centauri, may have been descended from ancient Greeks transplanted to the planet from Earth by the Preservers.[1] Alpha Centauri was the home of Zefram Cochrane, the inventor of warp drive,[3] and was one of the five founding member worlds of the United Federation of Planets[1] in 2087. By 2223, the system was home to a population of 21.5 billion,[2] second only to the Sol system.[1]