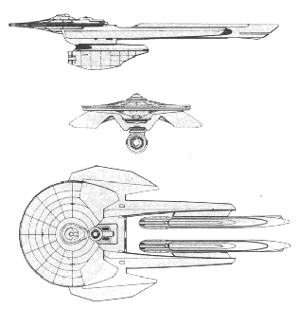 The Andor class was the only operational missile cruiser in Star Fleet as of Reference Stardate 2/2306 (June 2223). These unique vessels gained the respect and admiration of their crews because of their handling characteristics and offensive capabilities. The overall design came from Andorian design teams contracted to create a cruiser with photon torpedoes as its main weapons. These ships so captured the heart and spirit of the Andorians that the majority were crewed solely by them. All were named for Andorian military leaders. The Andor class formed the core of all squadrons in the famed "Blue Fleet," and was an integral part of front line forces for Star Fleet.

Like the Thufir class destroyer, the warp engines were mounted close together and center aft of the main hull. This afforded the engines more protection during battle because of the partial cover provided by the secondary hull. As with all Star Fleet vessels, the engines could be jettisoned in case of an overload in the matter/antimatter chamber.

The most unusual feature of this vessel was the weapons array. Mounting two FH-13 phasers and eight FP-7 photon torpedoes, it well deserved its informal name of "missile boat." Andor class vessels were capable of engaging the enemy at 180,000 kilometers with their phasers, and 16,000 kilometers with their torpedoes. Due to the number of torpedoes and the ranges at which they were most effective, these vessels normally operated in combat at 120,000 kilometers. The Andor class was encountered and engaged by both Romulan and Klingon forces, which were taken by surprise when the Star Fleet vessel fired a spread of torpedoes whose number was unexpected. In each case, the enemy withdrew from the field of battle before the cruiser could be fully put to the test.

The Andor class cruiser was manufactured at the Andor and Salazaar shipyards at a combined rate of 28 per year. As of Reference Stardate 2/2306, of the 140 Andors built, 138 remained in active service at that time. Two were scrapped after a high-speed collision that resulted in irreparable damage.[1]