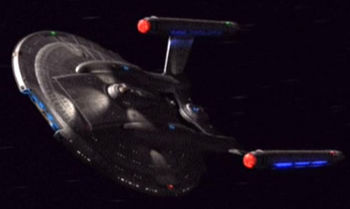 In late 2154, a site was finally chosen for the location of Starbase 1 on Berengaria VII.[6] Within a month, Tellarite and Andorian ships joined the Columbia in bringing the first construction team to the planet; this group of technicians and engineers informally dubbed themselves the "Starfleet Corps of Engineers."[7]

In 2155, the Columbia was assigned to protect shipping lanes used by members of the fledgling Coalition of Planets, following several attacks on Coalition shipping lines. The Columbia later responded to an attack on Draylax by Romulan-controlled Klingon ships. While investigating that attack, the Columbia was then forced to attempt to defend a number of freighters in the Alpha Centauri system from Romulan-controlled Vulcan ships.[8]

In November 2155, a fleet of five Romulan warbirds under the command of Admiral Mindar approached the Berengaria system. The Columbia, the Discovery, under the command of Captain Curtis, and the Excalibur, under the command of Captain Bran Stiles, immediately saw that they were hopelessly outmatched. The Romulans were jamming all communications out of the system, so Hernandez ordered Stiles to retreat and warn Starfleet Command. Two Romulan ships broke off to pursue the Excalibur, while Columbia and Discovery fought the remaining three. Columbia barely escaped the engagement, having bought time for as many of the base personnel to escape as possible, but Discovery was destroyed. [9][6][7]

In 2156, while escorting a mining convoy from the Onias sector, the Columbia was attacked by a group of Romulan starships. The Romulans used their telecapture system to take control of the Columbia, using her to destroy the convoy. The crew of the Columbia then faked a self-destruct by detonating a photonic torpedo simultaneously with a brief warp jump. The Columbia was severely damaged in the attack; warp drive and communications systems were irreparably damaged. More than half the crew and most of the MACO contingent were dead, with only forty-two surviving. Rather than wait for rescue, Captain Hernandez ordered the ship to set course for a planet that long-range scans indicated might possess intelligent life at near-light speeds. In order to get to the planet without warp drive, the Columbia used her impulse engines to achieve the highest possible sub-light speeds, resulting in relative time dilation; Columbia arrived at the planet in 2168, though only 63 days had passed aboard ship.[10]

Upon arriving at the planet, Erigol, its inhabitants, the Caeliar, informed the landing party that they would never be allowed to return home in order to protect the Caeliar's privacy from the outside galaxy. Several Columbia crewmembers and MACO officers ignored Captain Hernandez's orders to cooperate with the Caeliar, destroying a Caeliar city and disrupting their ongoing inter-galactic communications program known as the Great Work. This set in motion a sequence of events leading to Erigol's star going supernova and the destruction of Erigol, and to the creation of several unstable subspace vortices. Columbia, attempting to flee the supernova, entered a subspace tunnel that led to the distant Gamma Quadrant; the entire crew that was still aboard was incinerated by the hyperphasic radition present in the subspace tunnel, forty seconds after entering it. The only survivors were the Columbia crewmembers in the Caeliar city-ships of Mantilis and Axion, which entered subspace tunnels that deposited them in Delta Quadrant in 4527 BCE and the Beta Quadrant in AD 1519, respectively. The Humans and Caeliar deposited in the Delta Quadrant would inadvertently merge, creating the Borg.[10][11][12] 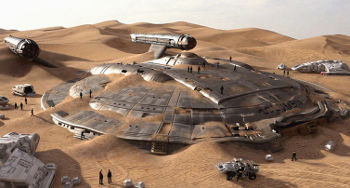 The disappearance of the Columbia became one of the most enduring mysteries in Starfleet history for more than two centuries, known only to have been last reported near Tau Ceti.[10] In 2373, the mystery took a new twist when the Columbia was discovered at its final crash site on a planet in the Gamma Quadrant by the crew of the U.S.S. Defiant NX-74205.[13][10] The Defiant crew were forced to abandon their investigations when Jem'Hadar ships were detected approaching the planet, and two months later the Dominion War began, making the recovery of Columbia a low priority. The discovery led some to speculate the Dominion had visited the Alpha Quadrant far earlier than previously believed.[10]

In 2380, the mystery of how the Columbia reached the Gamma Quadrant was re-visited when the U.S.S. Aventine NCC-82602 returned to the planet, searching for a link between its arrival in the Gamma Quadrant and the unknown mechanism being used to send Borg vessels into the Alpha Quadrant during the Borg Invasion of 2380. Research of Columbia's wreckage led the Aventine crew to discover the subspace tunnel that had transported Columbia to the Gamma Quadrant, and ultimately the source of the Borg's entry.[10]

Following the end of the war with the Borg Collective, the Columbia was returned to port in the Sol system; she was brought to the Utopia Planitia Fleet Yards by the U.S.S. da Vinci NCC-81623. [12]