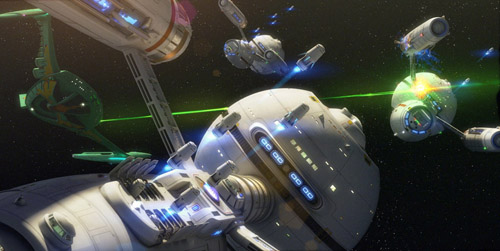 The Daedalus class came into service in the 22nd century,[1] and was one of the first types of starships commissioned and operated under the auspices of the United Federation of Planets. The Daedalus class was also among the first to demonstrate the primary/secondary hull design that would become characteristic of Starfleet vessels.[2] Unlike most starships, the Daedalus had a spherical main hull.[3] The last ships of this class were—at least officially—taken out of service by the year 2196,[1] though several remained in service well into the 23rd century.[4]

The Daedalus class was already an older design at the onset of the Romulan War, with the class vessel, the Daedalus, being launched in 2139,[5] but was easily refitted with newer technologies introduced on the NX class, notably including the newer Warp Five engines, photonic torpedoes, and phase cannons. Designed for function before form, the Daedalus class ships weren't as sleek or elegant as their NX class sister ships, but they could be constructed far faster, making them a mainstay of Starfleet forces during the war.[6]