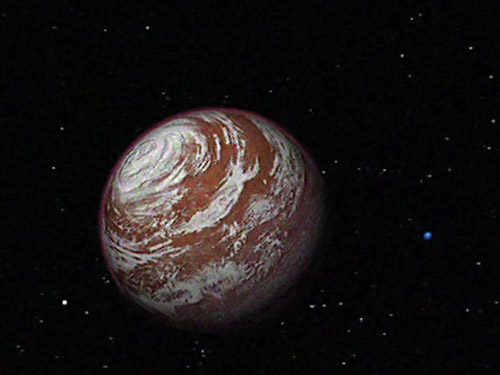 The planet Delta Vega, which shared its name with an icy planetoid in the Vulcan system,[1][2] was a few light days from the Galactic Barrier. "Slightly smaller" than Earth, Delta Vega was "completely uninhabited… Desolate, but rich in crystal and minerals.[3]

Delta Vega was home to an automated lithium cracking station, and on Stardate 1313.1, Captain James T. Kirk of the U.S.S. Enterprise NCC-1701 ordered his crew to cannibalize the station to repair the ship. Kirk was also forced to maroon his friend, ship's navigator Lieutenant Commander Gary Mitchell, who had been overcome by an alien influence that had given him godlike powers. Before the ship could depart, however, Mitchell escaped, and Kirk was forced to kill his friend.[3]