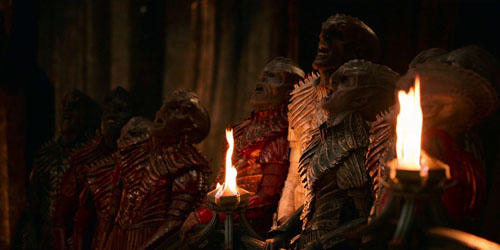 The Klingon death ritual was rarely seen by Humans prior to 2364. During the rite, a fallen warrior's eyes were opened, to allow their soul to escape the body, and the other warriors present would howl loudly, announcing that a warrior was en route to the afterlife. Though many Klingons viewed the body as an empty shell to simply be disposed of at that point,[1] some sects had rituals that involved entombing the bodies of fallen warriors in sarcophagi.[2]