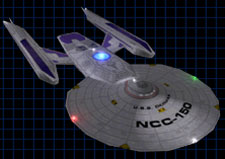 A contemporary of the Constitution (CA) and Akula (DD) classes, the Okinawa class frigate (FF), introduced in 2250, had good forward firepower, but (like most Federation ships) poor weapon arcs to the rear. The unique long-range ability of the photon torpedo meant that the FF could support long-range bombardment, unlike most frigates of other powers. The FF had a crew complement of 160, capacity of five shuttlecraft, two science labs, two transporters, two tractor beam emitters, and was armed with photon torpedoes fired from two tubes and a combination of Type-1 and Type-3 phasers. The FF remained in production until 2273.

A police ship (POL) variant was introduced simultaneously to the FF, and was similar in most respects. The primary differences were that the POL had a lower maximum warp drive speed, weaker shields, a four-shuttle capacity, a single torpedo launcher, and only Type-1 phasers. The limitations of the POL quickly became apparent, however, and it was soon refit to the POL+ specifications, which gave a slight boost to shield capacity, brought shuttle capacity up to five, and added Type-3 phasers to its defensive armament.

The FF was useful in many patrol and escort roles, but the design was quickly upgraded to the FFG for wartime use in 2261. The FFG specifications added missiles, improving its firepower and combat flexibility, and increased protection from rear attacks. The FFG remained in production until 2295.

Conceived simultaneously with the Akula class DDG variant and commisioned in 2269, the drone frigate (FFD) proved to be an unpopular version of the Okinawa class, replacing both torpedo tubes of the FF with missile launchers and increasing shuttle capacity to seven. The missiles did not make up for the lack of photon torpedoes, and the FFG+ variant, released soon thereafter, added an eighth shuttle and a third missile launcher, nevertheless failed to adequately address these concerns.

The Federation produced a commando frigate (CFF) variant of the FFT transport frigate in 2271, which was able to carry an entire Marine battalion. The class increased the crew complement to 280, added a third transporter facility to allow for faster landings, as well as a capacity of seven shuttles and both Type-1 and Type-3 phasers, but the design featured no photon torpedo or missile capabilities. The CFF+ was released soon thereafter to address concerns with the design by adding an eighth shuttle and a missile launcher.

One of two competing designs for a Federation war destroyer project in 2283, the battle frigate (FFB) was seriously considered because it could be built with existing frigate components. After a fly-off between the FFB and the Akula class war destroyer (DW), it was decided that the FFB, with a crew complement of 180, was too small to accommodate future developments, and the DW was ultimately selected. A few ships beyond the prototype U.S.S. Ramius were built, and were often used to leade a frigate squadron.[1]