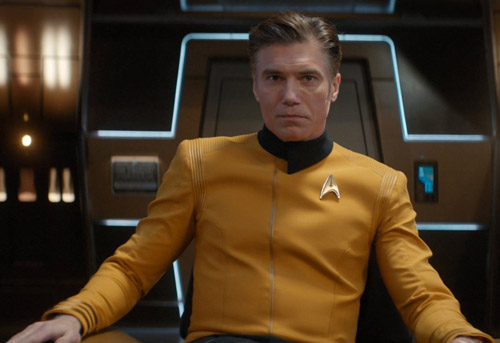 Captain Christopher Pike was born and spent his boyhood in Mojave, California on Earth. His mother made chicken-tuna sandwiches for him.[1] As a child, Pike suffered from childhood asthma. While attending Starfleet Academy, Pike's grades were, with a single exception, excellent; he received an F in Astrophysics, but received As in his other courses, including Advanced Navigation, Advanced Tactical, Ancient Philosophies, Communications, Earth History, Survival Strategies, Interspecies Protocol, and Tactical Analysis.[2]

Pike served aboard the U.S.S. Antares, the U.S.S. Chatelet, and the U.S.S. Aryabhatta prior to becoming the first officer of the U.S.S. Enterprise NCC-1701 under Captain Robert April[2] in 2247.[3][4] Pike assumed command of the Enterprise following the retirement of Captain April in 2250.[2] Four years later, in 2254,[5] he made contact with the Talosians on Talos IV,[1] and upon his recommendation, the planet was quarantined by the Federation.[6]

When the Klingon War broke out in May 2256,[7] the Enterprise was on an exploration mission far from Federation territory,[8] and was ordered not to return to Federation space. By the time the ship did return, the war had been over for several months.[2] The Enterprise had been badly damaged over the course of the two years it spent away,[8] and while it returned to spacedock for much-needed repairs, Pike was temporarily assigned command of the U.S.S. Discovery NCC-1031.[2]

In 2265,[9] Pike accepted promotion to Fleet Captain,[6] and handed command of the Enterprise over to Captain James T. Kirk on Stardate 1278.4.[10] Kirk and Pike only met briefly at the change of command ceremony, but it would not be their last meeting. Two years later, while observing a cadet cruise aboard an old J class freighter, Pike rescued several cadets from delta radiation when the ship's engine core suffered an accident. The radiation exposure destroyed Pike's nervous system, and while his brain was still fully functional, he was completely dependent upon a life support chair and could not interact with the world around him beyond a rough system involving a light and beeping function that he could flash once for "yes," or twice for "no." His former science officer aboard the Enterprise, Lieutenant Commander Spock, now the ship's first officer, clandestinely worked with the Talosians to abduct Pike from Starbase 11 and return him to Talos IV, where the Talosians could use their powers of illusion to give him a semblance of a normal life once again.[6][11]