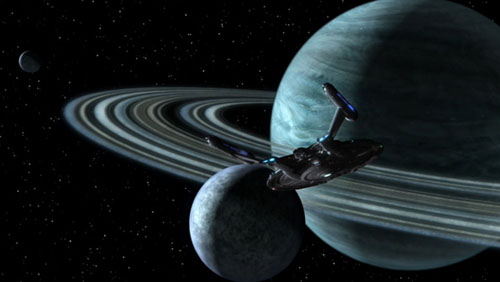 Eight planets orbit Procyon A, a Type F5IV-V white main sequence star, as well as a white dwarf companion, Procyon B.[1] Procyon A is known as Kuy'va to the Andorians.[6][2] Only Andoria, the moon[4] of the eighth planet,[1] is habitable.[6] The other worlds, which range from the class D and F inner planets to the Class J gas giants of the outer system, remain as they have been for millennia, owing to the Andorian dislike for terraforming.[6] These worlds nevertheless are home to Andorian colonies and outpoosts, as well as some Starfleet facilities.[6] The most well-known of these is the Andoria VII Observatory, one of the best-known interstellar observatories in the Federation.[6]

An asteroid field rich in crystalline minerals lies in an elliptical orbt beyond the furthest planet in the system.[6] It is home to a small mining operation run jointly by the Andorians and the Dytallix Mining Corporation, a partnership first established shortly after the founding of the Federation.[6]

The Procyon system's central location deep within Federation space would make it a prime target for an invading force, but few targets would be more difficult to take. The system has a permanent starship presence, typically hosting several starships at a time. Most of these are from Andoria's home fleet, but numerous Starfleet ships are often found in the system as well.[6]