The second planet orbiting 40 Eridani A in the Vulcan Sector (aka Sector 005) in the Beta Quadrant,[1] and well known as a hot, desert world, Vulcan nevertheless became the cradle for not just one, but two major starfaring civilizations.

Vulcan—known as Ti-Valka'ain in the Vulcan language[3]—is a hot, dense world with little water and a comparatively thin atmosphere.[4] Vulcan's atmospheric pressure is only 74% that of Earth,[3] and Humans engaged in strenuous physical activity require the aid of a medication, such as a Tri-Ox compound, to endure alongside their Vulcan companions.[4] Temperatures are high on Vulcan;[4] averages ranged from 50 to 60 degrees Centigrade.[16]

Only 28% of Vulcan's surface area is covered by water, most of which is concentrated in two relatively shallow seas. Other bodies of water, such as rivers or lakes, are rare.[3] While a few fertile areas dot the planet along the shores of the seas, and are home to virtually all of the planet's arable farmland,[3] Vulcan remains primarily a desert world,[4] marked by mountainous terrain, semi-barren plains, and many active volcanoes, geysers, hot springs, and other geological phenomena.[3]

In addition to Vulcan's farmland, the shores along the seas are also home to old-growth forests and jungles, which produce the planet's breathable atmosphere, as well as the animals that inhabit those areas. Many of Vulcan's cities are also located along these shores; the population in desert and mountain regions is, understandably, relatively light.[3] 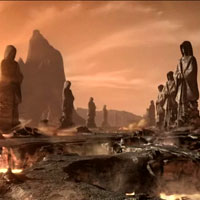 Vulcan's surface is divided into three continents—Na'nam, Han-shir, and Xir'tan—which are themselves divided by two relatively small and shallow bodies of water—the Voroth and Thanar seas, which are joined in the planet's southern hemisphere. Na'nam and Han-shir are immense land masses, each divided into several provinces, whose boundaries date back to the Age of Antiquity.[3][17]

Na'nam is the home of Vulcan's capital, ShiKahr, as well as the planet's primary spaceport, Vulcana Regar, and several other important locations, including Mount Seleya. Han-shir contains three major cities—Kwil'inor, Vulcinis, and Da-leb—as well as the massive T'ralor Preserve, which is home to many examples of endangered Vulcan wildlife.[3]

Vulcan's third continent, Xir'tan, is a massive island, much like Australia, but somewhat larger.[3] Visitors to the planet are advised to give the continent a wide berth,[17] as it is the most tectonically unstable area on the planet,[3] to the point of uninhabitability.[17] Xir'tan had more than 40 active volcanoes in the late 24th century, and is frequently wracked by seismic activity. As a result, it is sparsely populated, and most of that population consists of geologists, other scientists, and personnel from the Vulcan Mining Institute, academic institutions, or private companies.[3] 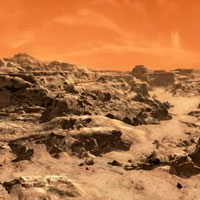 Much of Vulcan's surface is covered in deserts and sharp mountain ranges.[4][7][10][9] Perhaps one of the most famous of these areas is the Forge,[18][9] which is home to powerful electromagnetic fields that can disrupt sensors and even cause electrically-charged sandstorms, known as "sandfires," with lightning discharges powerful enough to kill a humanoid.[9]

Vulcan was once divided among many nation states prior to the Time of Awakening, when Surak brought logic and reason to Vulcan.[13][9][19][3] By Surak's time, the 15 nation states that existed at that time[3] had allied into two opposing factions.[17] As Surak sought to bring peace to Vulcan through logic, however, he was opposed by Sudoc, a tyrant from the city of Jaleyl who had conquered most of the planet.[3] Sudoc's followers, who had resorted to nuclear strikes in their bid to conquer Vulcan,[15] eventually were overwhelmed by the sheer number of Vulcans who had embraced the teachings of Surak. Disgusted, and unwilling to embrace a life without emotion, Sudoc's followers instead chose to leave Vulcan. They commandeered a fleet of primitive interplanetary ships, and set out to find a world of their own.[3][19] 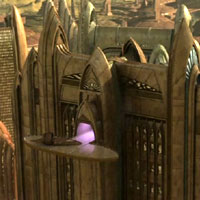 The existing city states became provinces in the new, united Vulcan government.[3] Over time, the Vulcan High Command, which initially was tasked only with space exploration, took over all functions of the government.[9] By the mid-22nd century, the Vulcans in charge of the High Command felt a sense of superiority to other races,[20] and routinely lied, withheld information, and meddled in the affairs of other races.[14][21] These Vulcans, particularly Administrator V'Las, were insular, suspicious, and not wholly devoted to Surak's teachings. Indeed, when the Syrranite movement arose, V'Las went to great lengths to try to discredit them, and even attempted to kill the group wholesale by bombing their encampment at the T'karath Sanctuary when they claimed to have found the Kir'shara, a lost, original copy of Surak's writings, as it could have turned Vulcan's population against a war that he intended to start against the Andorian Empire.[9][15][20]

The new government instituted in the wake of the Syrraninte reforms[22] was the smallest in the Federation,[3] which was formed less than a decade later.[23] Seven members make up the Vulcan Council: the Ministers of State, Defense, Security, Trade, Thought, Science, and Health, each elected for ten-year terms. While anyone is able to run, the system—like the High Command before it[20]—is essentially a meritocracy, with only the best and wisest being chosen. Each seat is elected separately, and every eligible Vulcan citizen votes when an election is held. The Minister of State, while officially equal to the other ministers on the Council, is generally regarded as the "leader" of the council. Passage of new laws or revision of existing laws is relatively uncommon[3] (discounting the Syrranite reforms that instituted the Council),[22] as the laws are rigorously and logically debated, and thus require little revision once enacted.[3]

Vulcan's most enduring conflict has been with the Romulans, who were descended from the followers of Sudoc,[3] or "those who marched beneath the raptor's wings,"[15] who left Vulcan during the Time of Awakening.[19][3] During the V'Las administration, the Vulcan High Command was infiltrated by Romulans.[20] Vulcan was allied with Earth and the other members of the Coalition of Planets during the Romulan War,[24][25][26][27] but the genetic link connecting Vulcans and Romulans didn't become general knowledge until 2266.[24] By the late 24th century, a Romulan Reunification Movement began to grow on Romulus; it advocated a reunification of the Vulcan and Romulan peoples, allowing the Romulans to reclaim their Vulcan heritage. Although its goals were noble, the Romulan Star Empire's government tried to use the movement for an attempted invasion of Vulcan in 2367.[28][29] Some Federation leaders, as a result, were justifiably concerned that reunificationists might have secretly been controlled by Romulan agents.[3]

The Vulcan High Command came into conflict with the Andorian Empire for more than a century, as their two home systems wre very near one another.[21] This conflict came to a head in the 2150s,[20] ending with the Syrranite reforms, the formation of the Coalition of Planets,[25] and the subsequent foundation of the Federation following the Romulan War several years later.[23]

A small group of radicals, the Vulcan Isolationist Movement believes that contact with alien cultures has polluted Vulcan culture and destroyed the Vulcan way of life. While widely regarded as a fringe movement, the group's membership grew in the late 24th century. Some Federation officials were concerned that the group may have had ties to the Romulan government. Regardless, group members showed that they were willing to employ terrorist tactics to further their cause.[30][31]