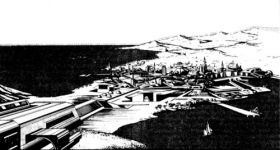 The planet Aleriad was the fourth of seven (formerly eight) planets in the NGC-994 system, and was the only Class M planet in the system, although the sixth planet, Eruna, showed signs of having once been Class M. Aleriad was expected to remain Class M for roughly 8.5 million years, at which point its parent star's weakened output was expected to leave the planet unable to sustain life.[1]

On Stardate 4740, the U.S.S. Drake NCC-541 conducted an orbital survey of Aleriad. A summary of the report indicated that the planet had a variable axial tilt, which caused a high degree of orbital anomaly, and therefore created a wildly fluctuating climate on the planet. On Stardate 6812, a detached-duty Federation scout, Ershan Costello, conducted a limited survey of Aleriad.[1] He noted:

"Aleriad is a startlingly beautiful world, both from space and from the ground. When seen from above, it is a frothy mixture of whiteish-orange clouds, deep green seas, and chocolate brown mountain ranges, obviously a planet with a wide variation in climate and geography. The far northern portion of the planet is shrouded in fuzzy gray clouds, and the far south is an empty ocean dotted with drifting fields of ice. The central region of the planet is divided by long mountain ranges which run from north to south, making the planet resemble some sort of giant fruit. ... It is one of the most interesting and beautiful places I've visited in forty-two standard years of scouting; I was tempted to just tell ExDiv to sit on itself when the recall transmit came through."[1]

The U.S.S. Enterprise NCC-1701 was dispatched on Stardate 7680.9 to lead a task force of several Starfleet vessels, along with Ambassador Robert Fox, to Aleriad. Although the planet's native population was subject to the Prime Directive, debris from the destruction of the system's fifth planet, Azheril, was found to be on a collision course with Aleriad, and was expected to wipe out all life on the planet. The task force was charged with saving as much of the population as possible.[1]