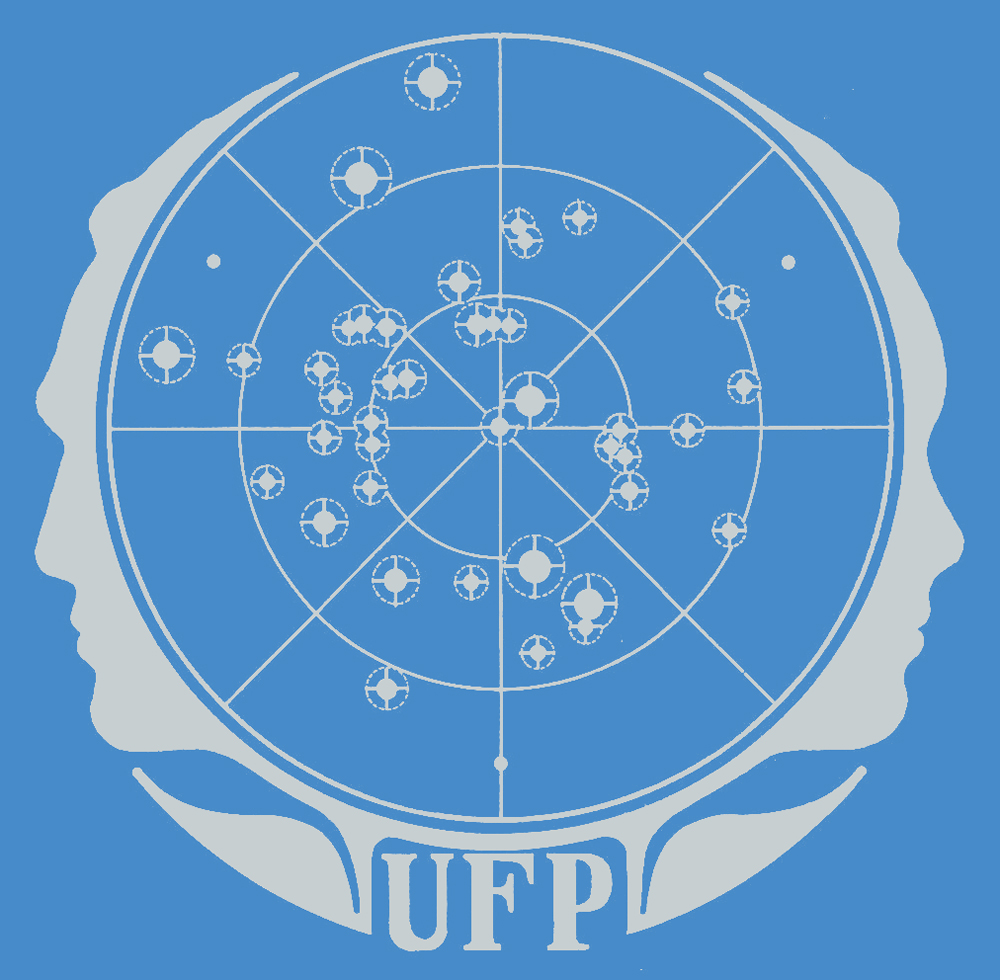 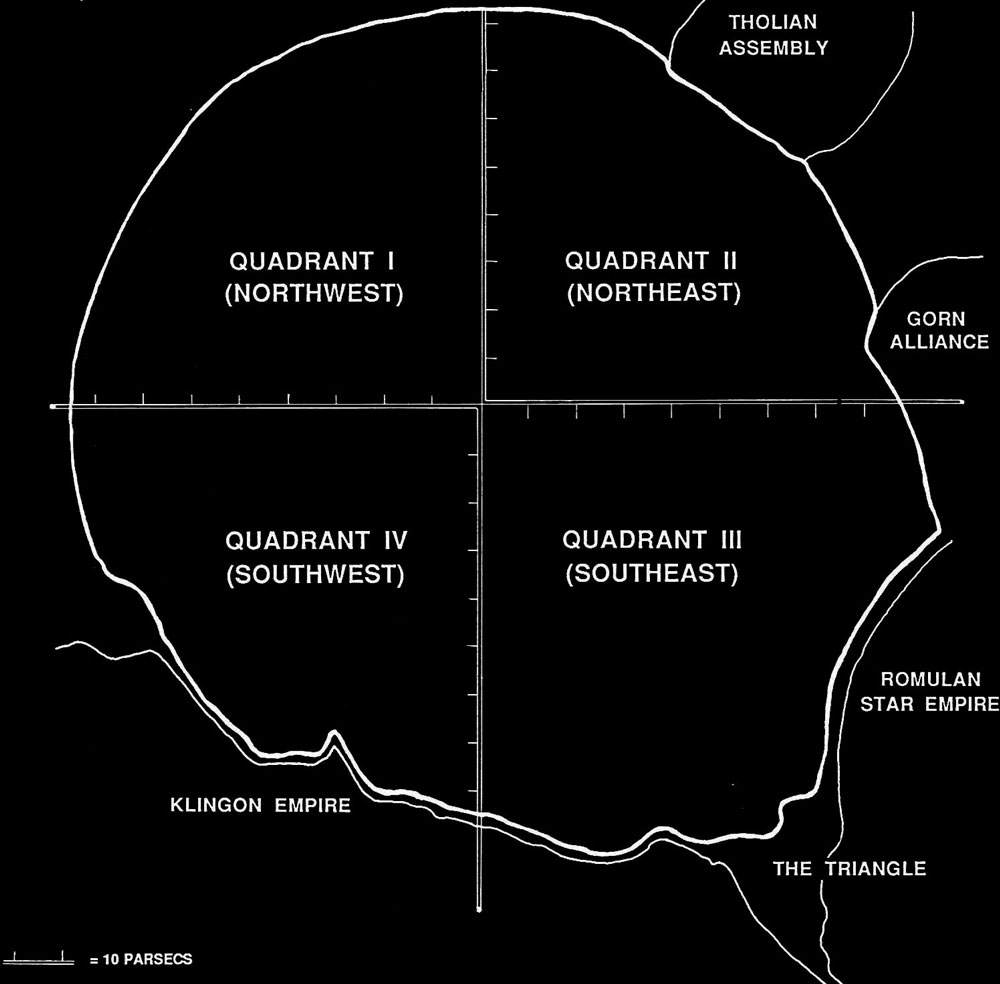 Map of the United Federation of Planets (FASA 2011)

The Federation was divided into four quadrants, and was bordered on three sides by the Klingon Empire, Romulan Star Empire, Gorn Alliance, and Tholian Assembly.[5] 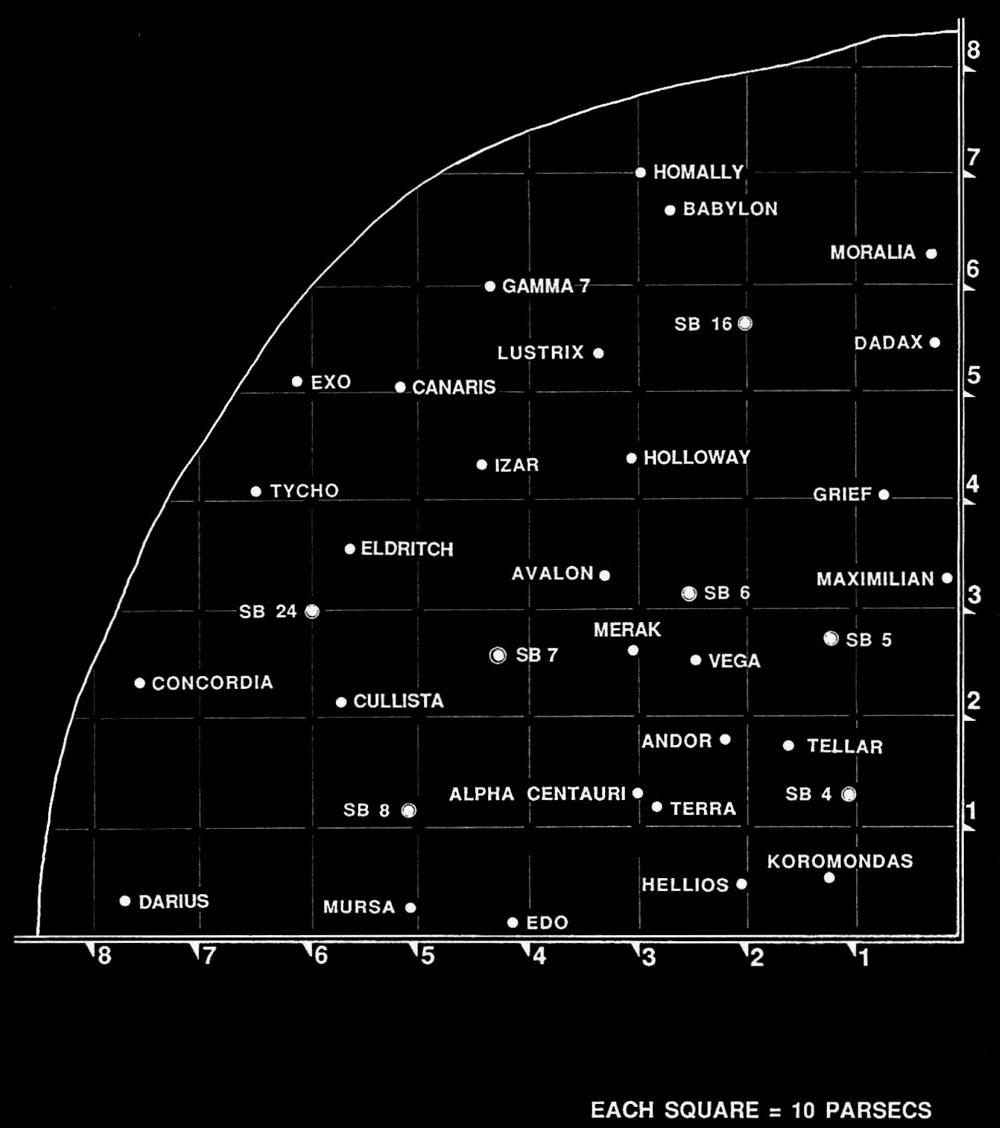 Quadrant One encompassed the original boundaries of the Federation as established on Reference Stardate 0/8706 (June 2087), containing the five original member civilizations of the UFP: Alpha Centauri, Andor, Tellar, Earth, and Vulcan. This region was one of the richest tourist and recreational centers of the Federation. By Reference Stardate 2/2306 (June 2223), an estimated seven billion Humanoid and non-Humanoid visitors vacationed in this part of the Federation every year. Beginning with Earth, there was a wide variety of sights and entertainments available. Earth was one of the most alluring worlds in the entire Federation. Much of the beauty and old-world style that was the hallmark of Terran civilization before the Eugenics Wars was completely restored. Aside from its landscapes, Earth boasted Star Fleet headquarters in San Francisco, and in orbit were the largest civilian and Star Fleet starship construction centers in the entire Federation. Though security measures prohibited the general public from viewing much of the work conducted by Star Fleet, the U.S.S. Republic, a decommissioned Constitution class starship, was open to tourists near the New Xanith Orbital Recreation Center. Also in the Sol system was Wrigley's Pleasure Planet, an entire planet devoted to delighting young and old for a modest price.[5]

The nearest system to Sol, Alpha Centauri, hosted the planets Alpha Centauri and Proxima Centauri, both major centers of advanced humanoid cultures. After Earth, Alpha Centauri was the largest cultural and scientific center in the Federation, and tourists discovered numerous social and cross-cultural exhibitions and displays reflecting the planet's primary member status. In addition, sports fans enjoyed the exciting sunjammer solar-sail races held between these two worlds each year. Students of history were inspired by the Cochrane Memorial and the Federation Historical Institute on Alpha Centauri and the Federation Peace Studies Institute on Proxima Centauri. In addition, both worlds were well-known for their huge expanses of unspoiled wilderness, areas rivalling even the famed Benecian outback.[5]

Sports lovers enjoyed the year-round skiing on Andor, which offered some of the best slopes in the quadrant. For those seeking the strange and unusual, they could Alpha Majoris, home of the Melitus cloud creature, or stop at Avalon, which presented visitors with a spectacle of knights in armor and fair damsels in the capitol city of Camelot. For those seeking entertainment on a grander scale, the planet Imagination had hundreds of special theme parks and picturesque preserves recreating dozens of specialized cultures and time frames from across the galaxy. Lovers of fine wine stopped off at Edo, home of some of the galaxy's most prestigious wines and liqueurs. After stocking up there, one could visit the central courts of the Federation judiciary on Alpha III, which also maintained several major firms that practiced interstellar law.[5] 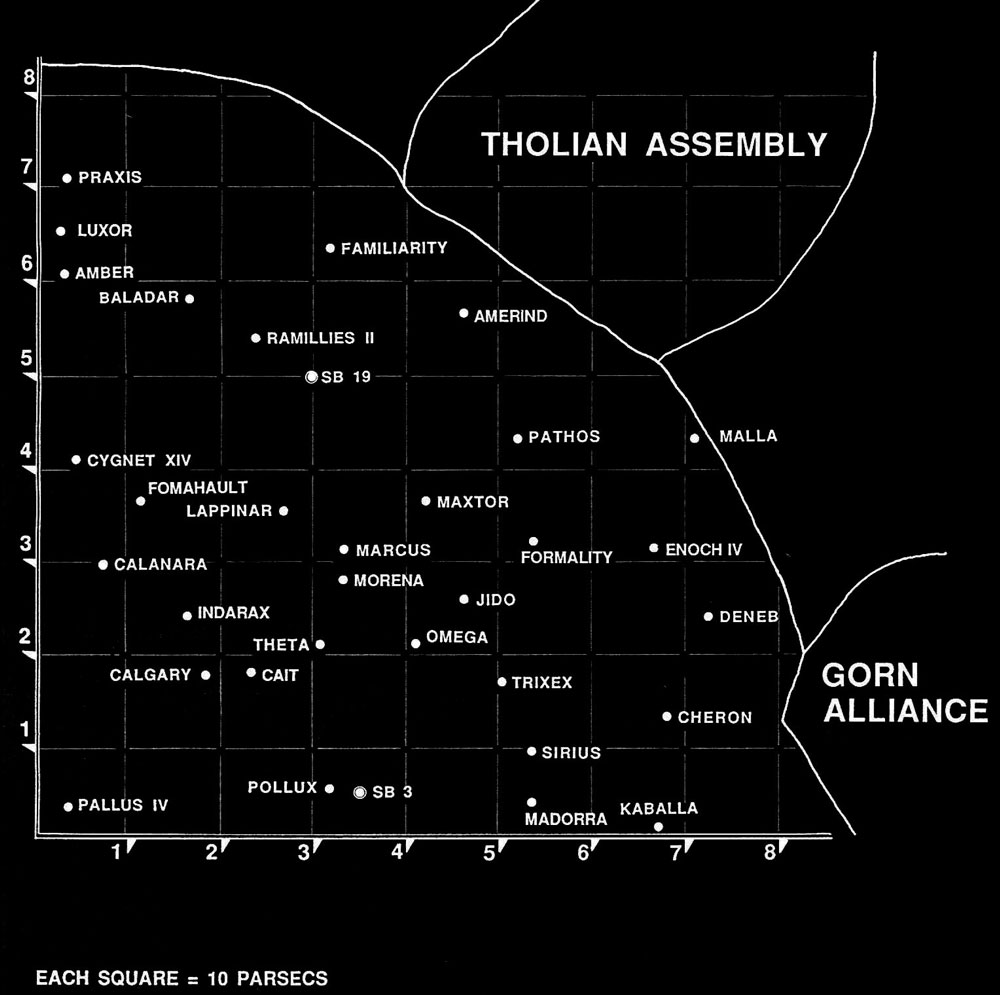 Though not as populated as its neighbors, this particular Federation quadrant had much to offer the dedicated sightseer. For instance, Altair was famous for the medicinal properties of its native waters. Millions flocked to this warm and sunny planet each year to 'take the cure' for whatever ailed them. For the bargain hunter, the planet Anchor offered the finest in local pottery and glassware, while Antares was a trader's delight. With no port-of-call restrictions, literally anything could be found in the thousands of bazaars making up Antarian society. For those interested in the finer things, Ardana's capital city in the clouds possessed some of the finest art and literature found anywhere in the Federation. Those interested in science marveled at the cybernetic and computer-oriented technologies displayed on Cygnet XIV. Gamblers enjoyed pausing in Castor Fields to play the planet's magnificent horse races, which were conducted with due pomp and ceremony. Investors paused on Demoiselle II, whose craftswomen were renowned for their excellent gems and precious stones. Eternity was the poignant and beautiful resting place of those who died in defense of the Federation. The wide, sandy beaches on tropical Cait, home of the Federation's only intelligent feline race, were also a popular destination.[5] 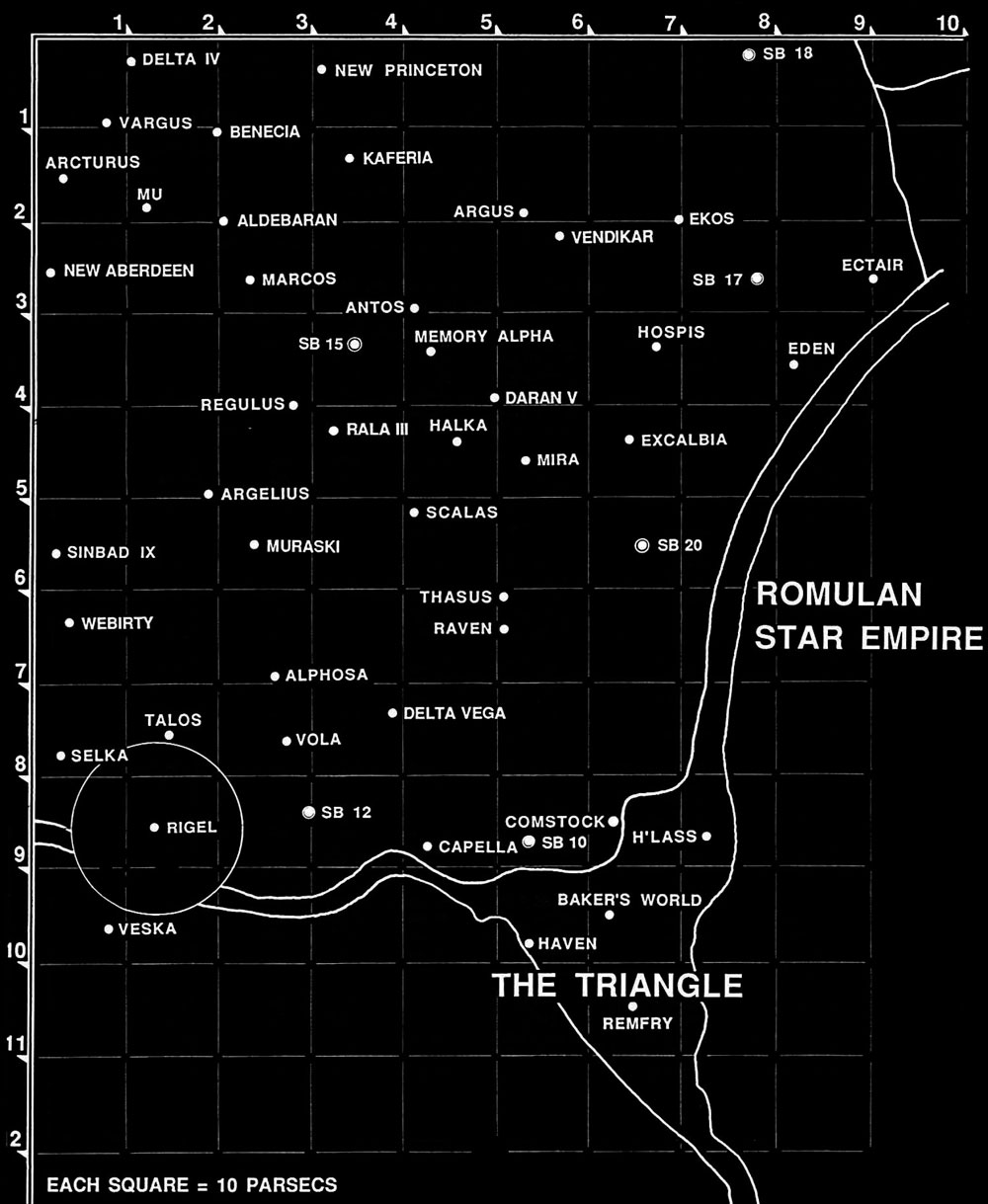 Seekers of the exotic often visited Aldebaran, famous for its amazing variety of plant life, rare wines, and other delicacies. Ingraham 8 likewise boasted some of the finest floral species in the known universe, many of which were for sale and were sure to appreciate rapidly in value. For those looking for a change from the modern technological age, the could step onto Arcturus and into Earth's past, where each day was the 16th century. Similarly, the planet Cyclopus presented visitors with the grandeur of Earth's ancient Rome in the modern age. History buffs enjoyed visiting the Star Fleet Museum on Memory Alpha. Capella tested a hunter's mettle with its famous power cats, among the most elusive and intelligent of all carnivorous prey. Romantics wanted to take their loved ones on a visit to Laura's World at least once in their lifetime; simple and undisturbed, the entire planet was devoted to lovers. If sandy white beaches were desired, tourists could stop by Lakeland. The fashion-conscious were enraptured with Daran V's fine textiles and silks.[5] 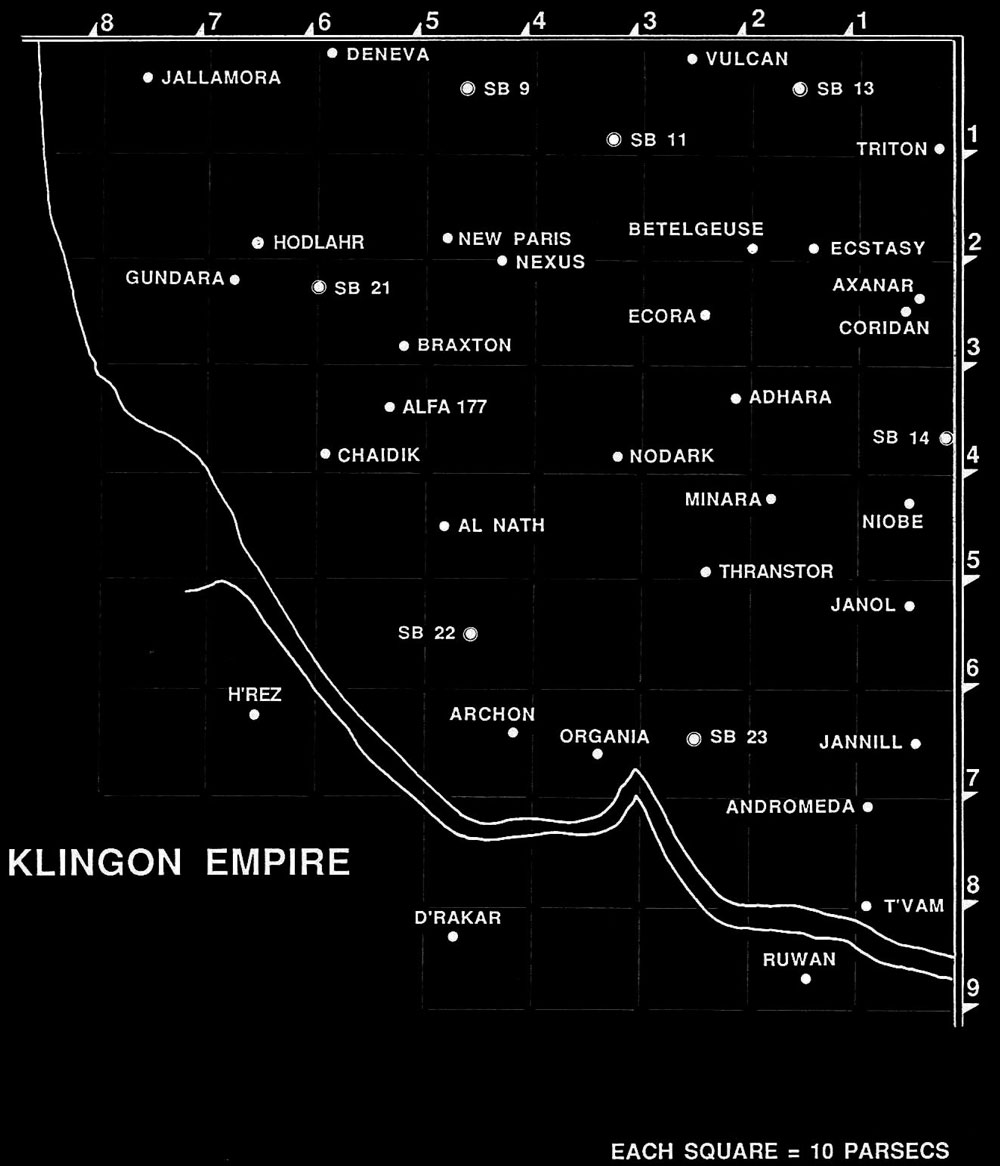 Seafood lovers fell in love with Alpha Proxima II, home of one of the Federation's largest sea-farming concerns and suppliers of rare culinary extravaganzas. In the eyes of many, Deneva was second only to Earth and Alpha Centauri as a cultural capitol; a visit to this warm and friendly planet was well worth the time spent, considering its vast array of classical and modern arts and entertainments. The planet Aplithin was home of the Federation's intelligent avians and their lofty eyries and majestic mountain cities.[5]