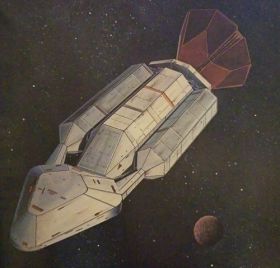 Earth's first warp capable ship, the Cochrane class entered service in 2058, and proved to be the remarkable craft its designers had hoped it would be. After nearly a decade of design, construction, and testing, the Cochrane class, named for the inventor of the warp drive engine, Zefram Cochrane, inaugurated a new era in space exploration. Inacessible interstellar spans became reasonable distances, as demonstrated by the U.N.S.S. Bonaventure's journey to Tau Ceti in 2061, nearly 12 light years away. The class used fusion engines to generate the warp field effect, and featured a detatchable life support section in case of a warp engine emergency. The class was retired from service in 2077.[1]