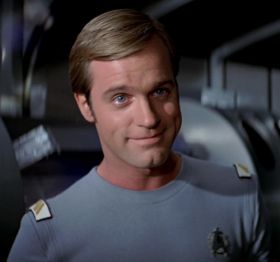 Captain Willard Decker was hand-picked by Admiral James T. Kirk to succeed him as commanding officer of the U.S.S. Enterprise NCC-1701 in 2270, when the ship finished its five-year mission and put in for an extensive refit. Nearly three years later, on Stardate 7410.2, Kirk replaced Decker as captain, temporarily reducing him in rank to Commander and moving him to the position of first officer. During the course of the mission to intercept V'ger, which was threatening to destroy Earth, Decker was reunited with Lieutenant Ilia, with whom he'd shared a relationship when he was stationed on her home planet, Delta IV. After Ilia was killed and replaced by a probe created by V'ger, Decker chose to merge with V'ger and the probe. The newly-merged life-form then moved to another reality.[1]