Earth, the homeworld of the Human species,[5] is the third planet in the Sol system,[5] located in the Sol Sector[2] (aka Sector 001),[19] in the Alpha Quadrant.[2] The United Earth Republic, founded in 2130,[4] co-founded the United Federation of Planets in 2161,[20][21] following the end of the Romulan War,[22] and the planet served as that nation's capital.[8] Earth was widely regarded as the nerve center of the United Federation of Planets.[3] In 2254, the Talosians viewed an image of the Sol system and many images of Earth’s history while accessing the U.S.S. Enterprise' NCC-1701's computer.[5]

A Class M planet,[5] Earth has a highly varied climate, and the planet—from the interiors of volcanoes to the bottoms of its oceans—teems with life.[3] Temperatures in the polar zones rarely rise above freezing and are inhospitable to life, and the sub-arctic zones, while also hostile to most life forms, are nevertheless home to very hardy plants and small animals; temperatures around the equator are often too hot for comfortable Human habitation during the summer months. The majority of Humans live in the planet's sub-tropical belts.[24] Large portions of the planet remain off-limits to further development as conservation zones or wilderness parks.[3][25]

Earth's landmass is divided into seven continents: Africa, Antarctica, Asia, Australia/Oceana, Europe, North America, and South America. Antarctica covers the planet's South Pole, and while heavily mined for natural resources, it has few permanent inhabitants, due to its harsh climate. North America, Europe, and Asia are heavily industrialized. Mount Everest, the highest point on the planet, is located in Asia.[24]

Earth's hydrosphere is divided into seven major bodies: the Arctic Ocean, the Arabian Sea, the Atlantic Ocean, the Caribbean Sea, the Indian Ocean, the Mediterranean Sea, and the Pacific Ocean. The Arctic Ocean covers the North Pole and is largely covered with a thick ice cap.[24] There is a significant amount of water on the planet, with 78% of the surface being covered with it,[3] making Earth very nearly a Class O planet (80% or more of the surface being liquid water).[2] The Pacific Ocean is the largest body of water on Earth; it divides the continent of Asia from the Americas, and completely surrounds Australia and the islands of Oceana. The lowest point on the planet, the Marianas Trench, is also located in the middle of the Pacific Ocean.[24]

Humans spent centuries working to restore the planet's damaged ecosystems and to restore lost species. This became even more urgent following the destruction wrought by the planet's Third World War. Weather control probes and oceanic fertilization programs helped to restore the planet to its prewar state,[3] and although the reintroduction of humpback whales—belatedly determined to be a sapient species—via time travel in the 2280s[8] was a dramatic example, genetic reconstruction programs restored thousands of extinct species, including the passenger pigeon, the great auk, the Bengal tiger, and the white rhinoceros.[3]

The history of Human civilization on Earth could be described as "a chronicle of failed attempts to get along with itself until, at last, humanity got it right."[24] From the beginning, Human ideals were forged and defended in conflict, and the seeds of the ideals upon which the Federation was founded could be found in the wars of the fifth century B.C.E., in the wars between the Greek city states and the Persian Empire.[3]

The twentieth century saw both democracy and despotism, and the conflicts between the two proved calamitous on a global scale.[16][3][24] Two world wars resulted in hundreds of millions of deaths, both military and civilian, as well as the advent of weapons based upon nuclear fission.[16][24] Following the Second World War, the United Nations was formed, but it ultimately failed, as it had no real power to curb member nations' sovereign rights, and it had little influence over private interests.[24] As the century drew to a close, this was made dramatically clear when the Chrysalis Project,[26] a privately-funded team of scientists, used highly advanced genetic engineering techniques to produce the Augments,[27] a group of modified Humans who were superior to the species norm.[14] In a series of coups, they quietly and anonymously[28][24] seized power in 40 nations.[14] The most powerful of the Augments, Khan Noonien Singh, secretly reigned over a quarter of the planet's population at the height of his power.[14][28] The Augments soon fell out with one another, and conducted a series of internecine conflicts among themselves that, as a whole, were known as the Eugenics Wars.[14][27] In 1996, Khan and more than 80 of his Augment followers were forced to flee the planet,[14] seizing a classified, experimental spacecraft, the DY-100 class, which they dubbed the S.S. Botany Bay, from a secret military facility in the Nevada desert.[28] The century ended on a note of optimism, with the ground-breaking ceremonies for the Millennium Gate,[29] as well as one of humanity's first attempts to travel into deep space. In 1999, philanthropist Optimo Basilius sponsored a project that took 2000 volunteer colonists from the United States of America and the People's Republic of China, and sent them into deep space. Contact was lost more than 50 years later, however, and their fate remained a mystery for more than two centuries.[24]

The conflicts and strife of the twentieth century carred over into the twenty-first, however, but the first inklings of a better future began in 2028, with the humanitarian reforms to the Sanctuary Districts that followed in the wake of the Bell Riots.[30][31] On 1 May 2053,[32] the Third World War broke out, with nuclear strikes devastating much of the planet.[18] Most contemporary accounts of the period were lost, and the historical record of the era remained fragmentary.[14][18] More than 600 million died in the brief war, and humanity was plunged into another dark age, with advanced civilization surviving only in pockets.[18] The Postatomic Horror gripped much of the planet, and some areas saw a return to barbaric "courts" where guilt or innocence was less important than the entertainment of the masses, and military forces were controlled by the use of narcotics.[13] In 2063, however, Zefram Cochrane and his assistant, Lily Sloane developed Earth's first warp drive engine from a modified Titan V rocket. On 5 April 2063, the first flight of the ship, the Phoenix, caught the attention of a passing Vulcan ship,[18] the T'Plana Hath.[33] The Vulcans initiated first contact, marking the first formal contact between Humans and an extraterrestrial species.[18] (Prior contacts with Vulcans,[34] Ferengi,[35] and Devidians,[36][37] among others, were all cloaked in secrecy or unnoticed by Humans of the time).

First contact forced a radical shift in how Humans viewed themselves, and their place in the galaxy.[18] With the assistance of the Vulcans, Humans began the process of repairing the damage to Earth wrought by nuclear war. Over the course of the next century, the scourges of poverty, disease, and war were eventually eradicated.[18] The United Earth government was formed in 2130,[4] with Australia being the last country to join in 2150.[38][39] Technology continued to advance, although the Vulcans refused to simply give Humans the technologies that the Vulcans had already developed, preferring to prompt the younger species to develop the technologies on their own, much to humanity's growing frustration.[1] In 2145, Emory Erickson invented the first functional transporter,[40] which in 2151 was certified safe for transporting living organisms.[1] Also in 2151, during humanity's first contact with Klingons, the Enterprise NX-01, the first Human-built craft capable of reaching warp 5, launched from the San Francisco Fleet Yards.[1] A year later, the Enterprise made first contact with the Romulan Star Empire. By 2155, humanity had brokered peace agreements between several of its neighbors—notably the Vulcans, Andorians, and Tellarites—and had laid the groundwork for the Coalition of Planets, an alliance between humanity and those three powers.[41][42] The Romulan Empire felt threatened by such a potentially powerful alliance on its border, and began to take steps to disrupt the Coalition before it could even be formed.[41][43][44] Within a year, the Coalition was at war with the Romulans, but the damage had been done. The Romulans had a weapon that enabled them to remotely take control of Coalition ships, to which non-Human ships were more susceptible. The Coalition began to splinter, and Earth soon found itself facing the Romulans with only meager support from its Coalition partners.[45][46][47] The war ended after Human forces inflicted a decisive defeat at the Battle of Cheron.[22][47] An armistice was negotiated over subspace radio, and a neutral zone was established between the Empire and what later became Federation space.[48] In 2161, following the conclusion of the Romulan War, delegations from Earth, Andoria, Vulcan, Tellar Prime, and Alpha Centauri met on Earth and drafted the conventions that founded the United Federation of Planets.[21][47] 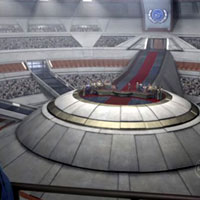 Earth enjoys one of the most advanced, peaceful, and materially pleasant cultures of any known species. There was no case of terrorist bombing or a State of Emergency, other than the Borg attack of 2366, reported in over a century prior to the Antwerp Conference incident and the Changeling scare of 2372.[49] Its worldwide power-relay system is run by the Division of Planetary Operations to operate sensors, transporters and surface-based defense installations. Starfleet also has its own emergency back-up system.[50] 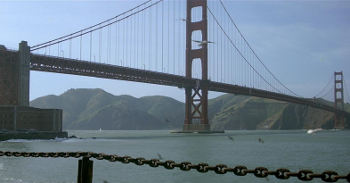