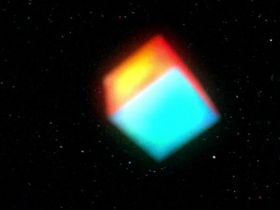 The buoys were used by the First Federation to assist in safeguarding their borders. A typical buoy was cube-shaped and measured 107 meters on each edge, with a mass of just under 11,000 metric tons. The warp-capable buoys were unmanned and were programmed to intercept approaching vessels and hold them in position until a First Federation starship could intervene. The U.S.S. Enterprise NCC-1701 encountered one of the buoys on Stardate 1512.2; the buoy released lethal levels of radiation, and Captain Kirk was left with no alternative but to destroy it, forcing a confrontation with the First Federation vessel Fesarius, commanded by Balok.[1]