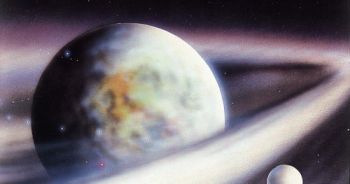 The homeworld of the Klingons, Klinzhai's orbital distance was longer than that of Earth, making its star an intense pinpoint of light, capable of causing blindness if looked at even briefly. Klinzhai was almost totally shrouded in clouds, however, and thus the sun was rarely visible directly, nor were the stars; there was evidence that Klingons saw a starry night sky less than one night in a hundred. As might be expected, "the naked stars" were objects of reverence, even awe, in Klingon culture. There was a belief that any act done under the stars had special significance. This helped to explain the dominant role of the Klingon Imperial Navy: they spent their lives among the naked stars.[2] 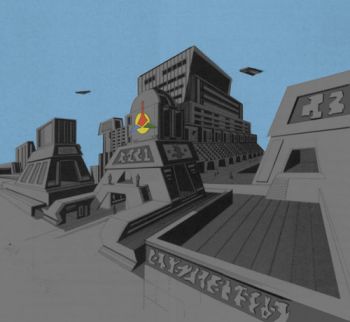 The cloud blanket also created a pronounced greenhouse effect: mean temperature was some 15 degrees Celsius above Earth's, and global humidity was very high. Klinzhai's day was somewhat longer than Earth's and the year was about 10% longer than a Terran year. The year was not divided into months, though there were "hot" and "cold" seasons - possibly misleading terms as the annual variation in temperature was small. There was snow only in the highest latitudes. The literature of Klinzhai did not mention a moon. This could mean that the planet's oceans were subject only to weak solar tides. This suits the speculation that life evolved longer in the oceans, perhaps to the fringes of intelligence.[2]

The planet was reportedly quite lush, with extensive forests, jungles, and swamps, and no deserts. The oceans had been developed, but the polar caps were ignored (except, perhaps, as military reservations).[2] According to Tagore and other visitors to Klinzhai, its oceans were more fully developed than those of most planets of the Federation. There was frequent mention of undersea farming in Klingon literature, and a disproportionate number of Klingon fighting men seemed to have extensive knowledge of underwater demolitions, seamanship, and such pursuits. It was known that Klinzhai was one of the few homeworlds of a technological civilization that actually exported more foodstuffs than it imported. Most of these exports, however, were edible algae and kelp-like plants destined for kuve worlds.[3]

Another product of the Klinzhai seas was fe'gli, a rare seaweed-based herb that was apparently a prime ingredient in preparations that had an aphrodisiac effect on most mammalian bipeds. Klingon aphrodisiacs had a galaxy-wide reputation, though it was unlikely that many individuals in the Federation had ever really seen (let alone ingested) any of these preparations. Even so, it was known that some fe'gli was exported (mostly through Orion brokers). Drugs based on the herb were extremely dangerous, as well as illegal throughout the Federation.[3]

Klinzhai was perhaps the best-defended planet in the known galaxy. The natural distrust and paranoia of Klingons was at its peak in Klinzhai's defenses against attack. This was only natural, as Klinzhai itself was the hub of Klingon civilization and the seat of its government. Vulcan made contact with the Klingons long before the rest of the Federation, yet it had no official records of the location of Klinzhai. Despite this, there were Vulcans who had been there and returned. The circumstances of these visits were not discussed by Vulcan officials or individuals.[2] Visitors to Klinzhai were almost never allowed to leave the port city of Aval on Klinzhai's main continent. The seat of Klingon government was elsewhere, at New Khal City, with the Imperial Residence an unspecified distance away and never visited by aliens. Klinzhai's planetary defenses included a huge network of manned and unmanned defense satellites. These orbital stations, similar to those around most Klingon colony worlds but much larger, were each capable of fighting off a small fleet. They were apparently powered by antimatter generators, which made them useful as a defense against spaceborne invasion and also as a check on the population of Klinzhai.[3]

The Klingons maintained a penal colony on a remote island continent, whose existence was revealed by Colonel Leland A. Schuyler-Grant, the only man ever to return from it. While still a Second Lieutenant, he was captured in a ground action during the Four Years War. Schuyler-Grant was taken to Klinzhai as a prisoner of war, because the Imperial High Command believed (erroneously) that he was one of the top advisors to the UFP Ground Forces Command. In reality, Schuyler-Grant was disguised as a general and carrying phony war plans as part of a disinformation effort by the UFP Intelligence Command.[3]

When Schuyler-Grant volunteered for the dangerous assignment, Vulcan experts trained him in pain-blocking techniques and other means of resisting drugs and torture. The plan went awry, however, when he was captured while trying to pass the false documents to a known Klingon agent. Knowing that he would be killed immediately if his true rank and status were revealed, Schuyler-Grant continued to masquerade as a prisoner of war, enduring torture and imprisonment while feeding false data to the Klingon High Command.[3]

After the war, he returned home as part of a prisoner exchange, with the Klingons still unaware that he was not a general staff officer. He was decorated and promoted, then served as an advisor on Klingon psychology for eight years before his death from complications of breathing radioactive dust during his ordeal.[3] 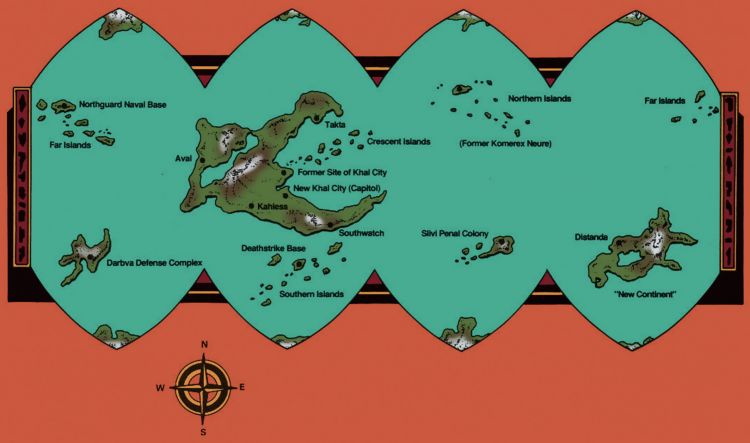